Well, not all of the road, in fact just one block between Main and State St on 200 S, and only one lane each direction. 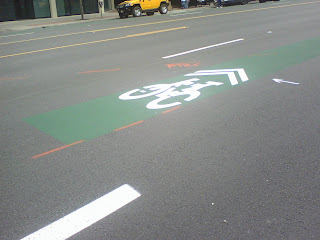 So, you are probably wondering what the big deal over some greeen paint on the road. The green paint there to remind cyclists and motorists that cyclists are allowed to use the full lane. The lines were painted on the outside lane where the road was too narrow for a separate bike lane, which the rest of 200 S has. Data will be collected on the lane for the next year, and depending on the outcome, the "shared-use" lanes will become permanent, and other streets too narrow for separate bike lanes will also be painted and signed. Check out the full story here. 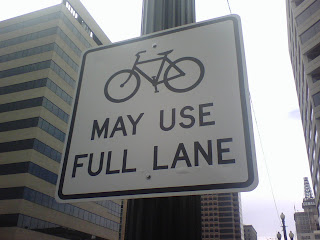 The law already states that bicycles have the right to use the full lane - even if there is a separate bike lane available, but most people probably aren't aware of that. Hopefully the large signs and road markings will help everyone safely co-exist.

This is probably something I should have already known. I wasn't aware they could use the whole thing. Thanks for the awareness!