CD review - 3 Rounds and a Sound

I am going to try to add something new to the blog: Music reviews.

But, instead of reviewing bands or CD's that sing about bicycles, or are bicycle-themed, I am going to review bands that tour by bicycle.

I don't remember where I heard about Blind Pilot, but I read somewhere about a band that toured by bicycle. All I know is that I got an email from the local library a few days ago saying the copy of their CD that I had placed on hold was ready to be checked out.

Israel Nebeker and Ryan Dobrowski make up the Portland, OR based indie rock/folk band Blind Pilot. Last year, they embarked on a west coast tour by bicycle. When I say "by bicycle", I mean entirely by bicycle. They pulled all of their instruments and equipment behind them in trailers, playing small towns along the way.

Now, I don't know how to do this. I have never reviewed a CD before, and I haven't read any other reviews about this group, so my review isn't being influenced by something someone else has said. What I do know is that I really like these guys. It's light, catchy music - an acoustic guitar paired with a drum set, occasionally accompanied by violins and a cello - that blends well with the solid vocals. Neither overpowering the other. I find my foot taping along with the beat frequently while listening to it - which I am doing as I type this. 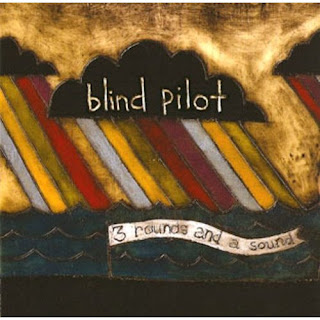 I pulled this bio off of their website/blog:

Israel Nebeker and Ryan Dobrowski are Blind Pilot. Friends since college, Israel and Ryan have traveled many a mile to get where they are today–literally. Last year Israel and Ryan embarked on a West Coast bike tour. This wasn’t a tour where they road bikes, and had a van hauling the equipment. They hauled everything on their bikes. No gas. 100% leg powered. Playing little towns that
don’t often get shows by “touring bands” – they were able to share their brand of music with people who weren’t particularly familiar with indie-pop, or indi anything. But they found that heart-felt lyrics an beautiful music appeal to just about everyone. In fact, they completely sold out of their EPs. They returned to Portland anxious to complete their first full-length album. The long road to this album has paid off in spades.

I highly suggest adding this album to your collection. I doubt you will be disappointed if you do. Meanwhile, enjoy this video from Youtube.

i even liked these guys. mellow. enjoyable. i liked your review, it was great. love you. k

They aren't bad. Kind of nice.