I believe in Floyd?

You know the scene in the Wizard of Oz where Toto pulls back the curtain to reveal that the Great and Powerful Oz is just a sham? A con man who was deceiving the people?

In the cycling world, a version of that happened today.

Floyd Landis, who was stripped of his Tour de France win in 2006 because he failed a doping test, and who mounted an unprecedented and epic campaign and court battle to proclaim his innocence - which he ultimately lost has purportedly sent emails to the New York Times finally confessing to his doping. Not only that, but emails also contain information on how he did it, and along with saying that doping is widespread throughout the professional ranks, some of the biggest names in cycling are implicated: Lance Armstrong, George Hincapie, Dave Zabriskie, and Johan Bruneel.

I'm not going to post a link, do a google search on Floyd Landis, you'll find plenty of links.

The articles do say that the emails have not been verified, but they are reasonably certain that they are genuine. In an exclusive interview with Neil Browne on the Versus website, Landis confirmed the email was genuine, but stated that it was leaked by unknown sources.

More than any other cyclist caught doping, Landis polarized fans. Maybe it was because of the lengths and expense he went to in proclaiming his innocence. Many believed in the system and immediately wrote him off as a doper and a cheat. Others believed the claims he made that the system was flawed, and saw the obvious breaches in testing protocol that he tried to use in his case against WADA and the UCI as evidence that maybe he didn't do it.

I was in the latter group. I believed in Floyd. I believed in his claims that the system was out to get him. I was genuinely excited last year to find that he was going to race in the Tour of Utah, and was happy that I was able to get a picture with Floyd. 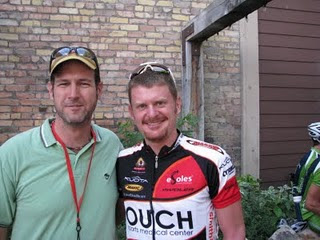 It's going to be interesting to see aftermath if this bombshell he dropped proves to be true.


Can I have the last four years of beliving you didn't cheat back?