Saturday was a good day, I got to cross something off of my unofficial bucket list.

Last year, after I finished my first triathlon, the sprint-distance Turkey Tri, I made a goal to complete an Olympic-distance triathlon before I turned 41. I always had my sights on the Spudman Triathlon in Burley, Idaho to complete that goal for a couple of reasons. The open water swim is in the Snake River, and my wife grew up in nearby Paul, Idaho and still has family that lives in the area.

I won't go into any individual fears about this triathlon, but I will say that I was nervous at the start of it. 1 mile of open water is a long swim. I also wasn't used to swimming in a full wetsuit, and wasn't prepared for the amount of resistance that the suit gave through the shoulders. To overcome that, I just rolled over on my back, and swam backstroke for a while to rest my shoulders.

Another thing I wasn't prepared for was how I would feel when I came out of the water. I had a friend who was starting in the same wave I was (he finished 44th in our age group). He told me before we started to take it slow coming out of the water, because of the dizziness that you experience. I did believe him, but I wasn't prepared for the level of disorientation. I was staggering around like I was on a 3-day bender. For a few moments I couldn't walk straight to save my life. I staggered over to my T1 location and finishing peeling of my wetsuit and grabbed my bike and gear for the ride.

I probably don't need to mention that the bike is my favorite part of the triathlon. The bike course was nice, flat and fast. I averaged a nice 20 mph for the course. It seemed like the only people passing me were guys who were on full tri rigs with aero bars (note to self, and whomever feels like being generous this Christmas. I want aero bars for next year) Aside from a little disruption caused by an ambulance about half-way out on the bike course (I overheard that someone had a heart-attack - but I have no confirmation if that is accurate), there was nothing of note on the ride.

We rode into T2 - I guess I need to insert a note here. Because of the nature of the course, specifically the swim portion, there are two different transition areas. You start off and swim downstream to T1. From there, you put all of your gear in to a hefty bag, and drop it off as you leave on the bike leg, and then you go to T2 which is back up where you started this whole adventure to take off on the run leg. The helpful volunteers haul your swim gear back up to T2 for easy retrieval after the race is over. Because of my unfamiliarity with the setup, I was out until almost 10:00 the night before setting up my transition areas. Okay, back to our story - and I threw on my shoes and cap and started off on the run. The run was great! It was part paved, and part trail. I used a run/walk strategy so I could finish strong (read: finish at all). We would be running along a road, and they would have us cut off the road and run along a canal bank for a while, and then back onto the road. The locals and farmers were great, too! The farmers would have their big water trucks alongside the road spraying water down for us to run under to cool off, and there were a couple of locals who set out their sprinklers, or had their garden hoses out to spray us as we went by. Plus there were quite a few who were just out to watch and cheer us on as we passed. Let me just say thank you! You don't know how much the cheering and watering helped!

I thoroughly enjoyed my first Spudman experience. I will be signing up next year for certain! I didn't take very many pictures because I parked a little too far to run my camera back to my car after the elite wave took off, so I'll post pictures of the race at a later time, or put a link in the blog then. Here are some pictures I took Friday night. 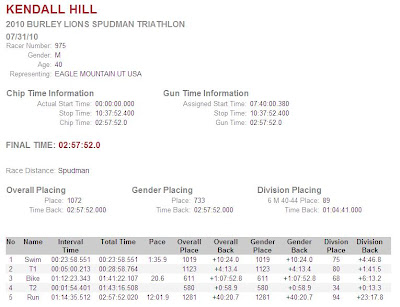 My offical results. I'm happy with my placement for my first Olympic.  There were 107 finishers in my age group, and 1545 total finishers. 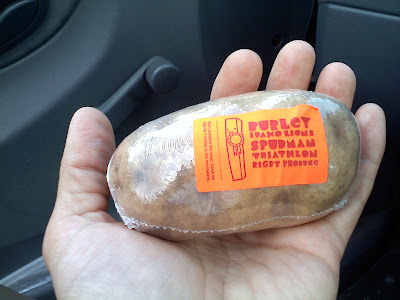 I found a potato in my bag along with my shirt and bib number. It is called the "Spud"man Triathlon after all. 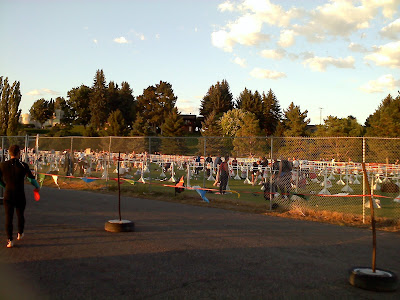 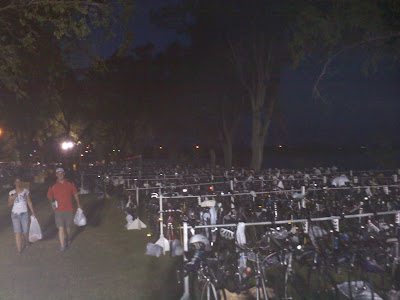 Part of Transition 1.  Yes, it is that late - plus it was threatening to rain on us. Fortunately there was nothing but blue skies for Saturday. 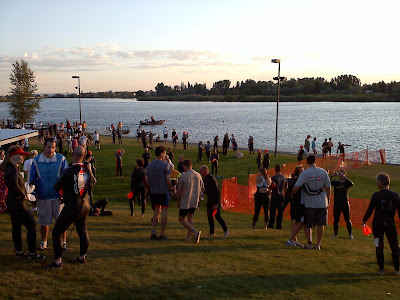 This is the only picture I took the day of the race.  The finish is that bridge over on the left side of the picture by the tree. 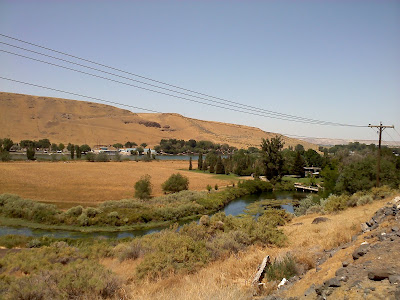 After the race I retired to our "exclusive" island retreat (Thousand Springs State Park. Kelly's brother is the park ranger and lets us stay there when we come up) on the Snake River to rest.
Posted by Bike Junkie at 10:50 AM

I'm so proud of you, Hon! Seriously... you're amazing. I wish we could have witnessed your first olympic tri, but you know. Keep up the amazing work. You're awesome!

I'm proud of you too. And glad you did good on that open swim (we were both a little worried about that.) Upward and onward to the next challenge !!

Great job on your tri!