One of the days, we decided to head across the border into the land of smugness (Portland is only the capital of bicycle smugness, it actually extends all the way through the state) to Ashland, Oregon. Mainly, because I wanted to add to my bike shop t-shirt collection, but also because it sounded like a nice day trip.

So, that was a lot of words to say that we were in Ashland, OR on Tuesday, hanging out in Lithia park. I was off with the kids in another part of the park when my wife saw a couple of people riding these: 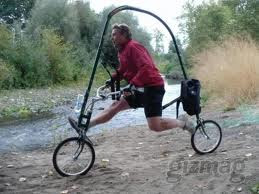 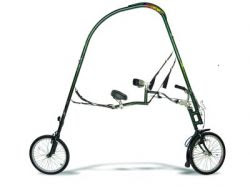 Unfortunately, I had the camera, or she would have taken a picture for me. It's called a GlideCycle, apparently they are made in Ashland, and apparently my wife was talking to the creators of this contraption.
When I look at one of these, and when I watch the video on their website, only one thing comes to mind:

Addendum: I guess that my wife did get a picture with her phone. Go hon! 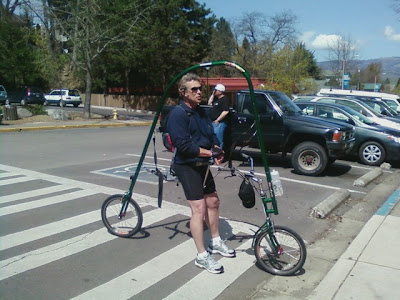 Email ThisBlogThis!Share to TwitterShare to FacebookShare to Pinterest
Labels: what the...

Only one thing comes to mind? I saw the videos, thanks to your blog. This thing looks like a kick butt workout and a lot of fun. Thanks for turning me on to it...
Jon

Hey, I own a glidecycle and I love it. I can't run anymore, but running with wheels is fast, fun and it doesn't hurt. Gosh, I am sorry you didn't see the utility and sheer genius of this "contraption" It is awesome and a great workout. You should try it.