Tales from the Commute

This definitely falls into the “WTH” category.


I start my commute from my house to the bus stop at 5:30 in the AM. Thankfully, due to the time of the year, it is light enough that I don’t need a light to see my way any longer.

This morning, I started my commute on the Fuji – maiden voyage for me! More on that later – as normal. Some mornings, I’ll see the occasional jogger, this morning was nice and peaceful. No one else on the trail. I came up the little climb on my route, rounded the corner, and found this sitting in the middle of the trail. 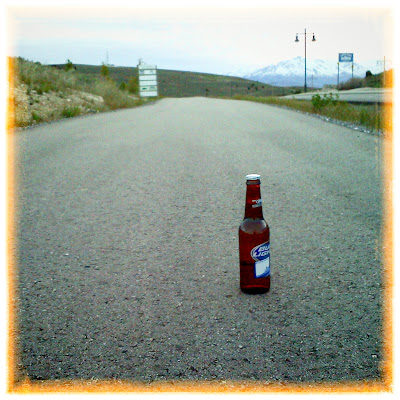 I did not set up this shot, this is exactly how I found it.
Empties are uncommon, but not out of the ordinary. But a full, unopened bottle of Bud Light sitting upright in the middle of the trail at 5:30 in the morning is enough to make one stop and scratch his head. I love starting the day like this!

Now, on to the Fuji. The ride in on it was great, but I really think that I need to set it up as a dedicated Tri bike, or something else. I felt guilty taking the Fuji and leaving the Specialized at home. Is that weird? This the first time that I have had more than one bike of the same type, and the first time I have had to choose which bike to ride. It's like choosing which child is your favorite.