My "Encounter" with a Car this Morning

Today I had an “encounter” with a car on my commute to work.

I’ve mentioned my commute before, but just to summarize: Bike to bus. Bus to downtown. Bike to office. The last leg is only about 4 blocks long, on wide, multi-lane streets, with only one right-hand turn. The street I turn on to (200 S, for those of you who are familiar with Salt Lake City), has a bike lane, and for a couple of blocks, has the outside lane marked with a green sharrow, All of this means – from my perspective – that there should be no reason for anyone to feel that I am “in their way”.

Today, the ride from the bus stop started off as normal, I rode up State St., signaled my turn (this is important, and comes into play later), and turned onto 200 S. less than half a block down 200 S., a car all of a sudden comes up past me on my left side, and makes a right turn into a parking garage. Right in front of me! I grab the brakes, and am able to narrowly avoid running into the side of her car. As I swerve around behind her, I give the trunk/rear quarter panel of her car a thump with my fist.

Yes, I probably shouldn’t have done that, but at that time, my heart rate was through the roof, and the adrenaline was pumping. I didn’t do it to damage her car. At the time, I was thinking I just wanted to let her know how close she came to hitting me.

As I went past, she started cursing at me. I should have let it go, but like I said, the heart rate was racing, and I was in confrontation mode. I spun around on the sidewalk to have “words” with her. She parked and got out of her car. She was still yelling at me, telling me that if I am going to ride on the roads, I should follow the “rules”, and that I should have been over on the green sharrow lane, not further to the right. I pointed out to her that she came around me and cut me off. I also pointed out to her that her actions could have killed me. At this time, a guy – he may have been in the booth at the parking garage, or just on the sidewalk – joined in, on her side no less, saying that he saw the whole thing and I was at fault! At this point, I saw that this wasn’t going to get better, but had the possibility of getting much worse, so I left.

First off, aside from running the occasional stop sign (sign, not light, and only when I am absolutely certain that nothing is coming), I follow the rules of the road. I waited in the right hand lane on State St, with traffic for the light so I could make my right turn. I signaled my turn, and stayed to the right of the lane, and was heading straight for the bike lane which started up just down the street from where this occurred. I wasn’t weaving in and out of the lane, I was doing exactly what I would have done if I was in a car. I couldn’t have been following the rules any more at that time

She was right on one thing, I wasn’t in the sharrow lane, because I just made a right turn, into the wide section of the lane that is to be used for vehicles turning right. At the point where I was, the sharrow lane was about 10 feet to my left, and it also ended right where she cut me off, as you can see in the Google Maps satellite image that I drew on below. 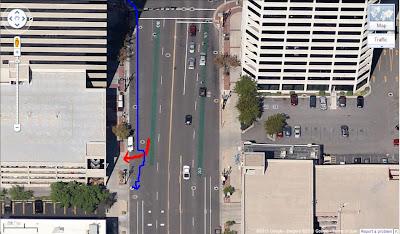 Blue line is me, red line is her, green line is the sharrow lane painted on the road. 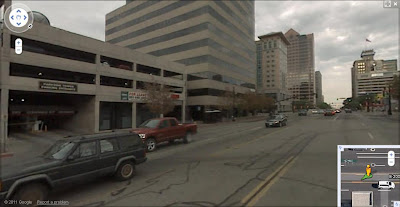 street view of the parking garage.
What it all comes down to, is that people in cars either 1) don’t see cyclists, or 2) don’t care about cyclists and think that we are in their way. What is your opinion? Obviously the above is my side of the story. Was I in the wrong? Was she? I will admit that I shouldn’t have touched her car, and I should have just kept on riding instead of confronting her. I could of handled the situation differently.
So, how is your morning so far?
Posted by Bike Junkie at 9:34 AM

Email ThisBlogThis!Share to TwitterShare to FacebookShare to Pinterest
Labels: I was nearly hit, morning commute, rant of the day

This is why I don't like bike lanes or marked-shared lanes - because it makes motorists think that those are the only places that bikes are allowed- and if you are not in those lanes, then it's open season on you and cars can do whatever the hell they want. The fact that she knows you weren't in the shared lane when she cut you off, means that she saw you - but because she thought you were illegal, she thought she had the right to endanger your life.

You were completely right here. Even if you were not in the right- she cannot cut you off like that.

Wow. That is scary! I think you handled it just fine. Even if she walked away thinking she was in the right, I have to hope that next time, she'll at least remember this encounter and be more cautious.

I also commute daily and very rarely do I have an easy uneventful ride. I have come to the conclusion that the reason for this is driver ignorance. Most drivers simply don't know how they are suppose to treat a cyclist. I am thrilled to see the campaign on road respect. And it goes both ways I might add. Nothing bums me out more than to see a cyclist breaking the "rules of the road". Bottom line, we have to bike defensively. Stay safe out there.

Not to seem completely ignorant, but I am so it doesn't really matter, but.... why weren't you in the sharrow? Looking at your map, I would assume you should have been there. No? I like what AK said about us people thinking that's the only place you should be when that isn't the case... but I am curious as to why you weren't using the green lane if it was offered? Just curious.

And that chick is DAMN lucky she let it go. If she had harmed you, she'd have an angry ME to deal with. She wouldn't like it when I'm angry. And YOU, my dear, are equally lucky that she wasn't packin' today or you'd have been toast. Whew!