In my little burg of Eagle Mountain, Pony Express Days is currently happening.

This year, there are several bicycle-related activites as part of the week-long festivites, including a family bicycle ride, the Pony Express Century, a mountain bike race and free kids mountain bike race. Due to schedule conflicts, the events that I could be a part of was severly limited, but I wanted to share what I did last Saturday.

In addition to the mountain bike race this past weekend, the local bike shop - Epic Biking -  brought the Giant demo van stuffed full of new bikes for people to take out. 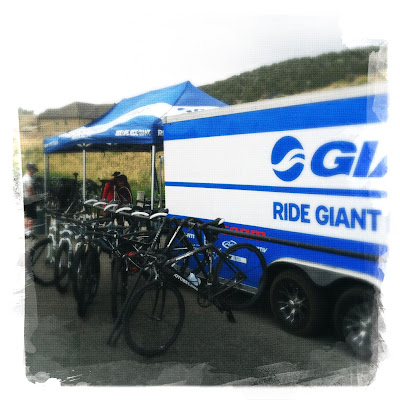 For those of you with sharp vision, the first bike is not a Giant, that is my Motobecane CX bike. I decided to ride to the demo instead of driving.

Along with a full selection of off-road rigs, they also had some road bikes for those who didnt' feel like getting dirty.

As luck would have it, as soon as I rode up to the Mountain Ranch Bike Park where everything was taking place, the rains came down in force. As I didn't feel like getting muddy, I talked to my friend Dan about taking out a road bike. Dan asked me if I would like to take out a bike equipped with Ultegra Di2. As I haven't had a chance to try Shimano's electronic shifting yet, I readily agreed. 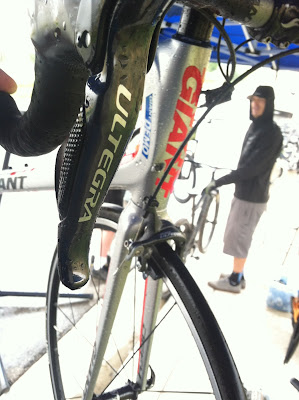 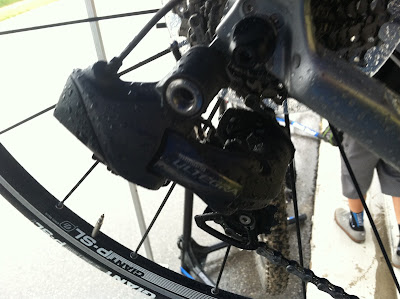 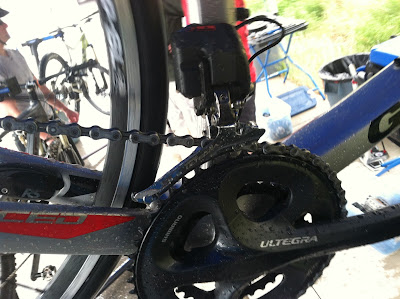 Sorry for the quality of the pics. I was trying to hold the bike steady under a wildly shaking pop-up tent during the rain and wind.

Dan set me up with a Giant Defy, and I headed out for a test ride.

Due to the fact that the forecast was rapidly deteriorating from 50% chance of rain to 100 % chance with gusting winds, I took the bike out for a short 5 mile loop, with a few short but steep climbs. My assesment of Shimano's Ultegra Di2 is nice! I was impressed with the quick, precise shifting the grouppo provided. just a light touch of the buttons on the side of the brake lever would send the chain up or down the cassette. It was also easy to shift with my rapidly numbing fingers thanks to the weather shift.

I wanted to take out a TCR, but the Giant guys nixed it, because of the weather. 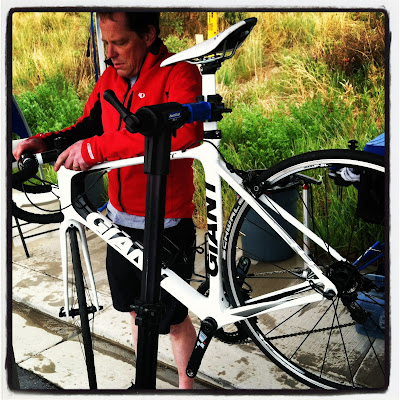 Dan with Epic Biking getting the TCR ready - before the plug was pulled.

It would have been nice if the weather would have cooperated, but you can't have everything.

Thanks to Epic Biking and Giant Bicycles for sticking it out through the rain.