When you hear the word “chia”, most of us instinctively start singing the jingle “cha-cha-cha-chia” from the ChiaPet commercials – that being the only exposure we have had to chia seeds. 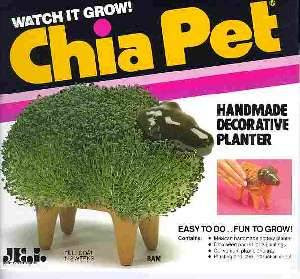 But, if you have read Born to Run by Christopher McDougall, you know that chia is actually a highly nutrient-dense food used by the native Tarahumara to fuel them during their epic runs,

I was introduced to Achiva at the New Year’s Revolution Run on December 31st. They had a table set up on the side of the oval, and handed me a cup of this brownish liquid as I ran past. I drank it down, and liked it. It wasn’t as sweet as the “-aides” that they had mixed up at the water table further down the track. I paused on the next lap and talked to the people at the table. They explained how chia seeds were a good and balanced source of carbohydrates, protein and fat, and the coconut water was a natural electrolyte. They also added some unrefined sugar, sea salt and chai tea (for that caffeine kick!).

A couple of weeks later, I found Achiva at the Outdoor Retailer Winter Show, and they gave me a bag for a long-term review. Each bag gives you approximately 24 servings (add one scoop to your water bottle, shake and let sit for several minutes before using). I’ve used it on almost every long ride I have been on this spring, and I have been pleased with the product.

I don’t know if you have the same problem, but after 70+ miles in the saddle, most energy/hydration drink mixes start tasting way to sickly-sweet to me, and I almost can’t choke them down. I haven’t encountered that problem with Achiva, the bag I tried (chai tea) has a mild sweetness to it, and it doesn’t get overpowering later in the ride. It also did not seem to have the high sugar spike/crash like some of the other mixes – It was more of a gradual/sustained energy source.

One thing of note, there is a “texture” to it. The chia seeds impart a slight “grittiness” to the drink, which may take some getting used to. Also, you will want to use a water bottle with a higher flow valve, so the seeds don’t block the flow.

A bag of Achiva will cost you $18, and is available in 4 flavors: Chai Tea, Mango, Pomegranate, and Raspberry Green Tea. They are available at several running stores, and online. 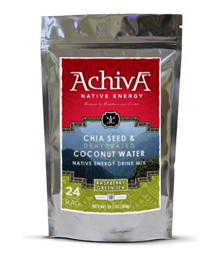 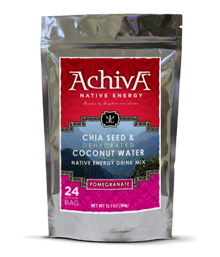 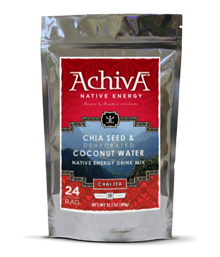 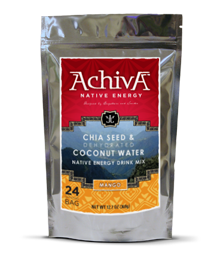 Huh. Interesting. Maybe I'll have to try some.

My favorite is the Raspberry Green Tea. Wait til you try their Chia/Coconut Water jelly beans. Great while on your bike.