Friday, I joined the club that no cyclist wants to be a member of. I was involved in a car-bike accident.

Let me say right now, that I am okay. No broken bones, just a little bruised and sore. The bike came through it okay as well.

It was a classic SMIDSY (Sorry, mate. I didn’t see you) situation. He was turning left into a parking lot, and I was riding beside a lane of cars waiting at the intersection ahead. One of the cars waited back to give him room to turn, and he turned just as I was coming up to that same location. I met him at the front passenger quarter panel, and rolled over his hood to the driver side. After a quick self-assessment (and a healthy bout of swearing), I stood up and went to check on the bike. I was surprised to see that the only damage was a loose front hub, and my chain fell off the chainring.

A witness called 911, and after I was checked by the EMT’s (I declined a ride to the hospital in the back of the ambulance), I talked to the officer who was called to the scene. He gave me the information of the driver, and since my bike survived unscathed, I finished my commute.

To say I was lucky would be a gross understatement. If I had been riding just a bit faster, or had been a foot further down the road when I collided with the car, I would have more than likely gone under or over the front of his car, and this story would have had a drastically different outcome. As it stands, all I got was a sore shoulder, elbow, minor sprained wrist, and a broken helmet (I know I hit my head at least once, and my vision was blurry for about 10 minutes after the accident). Like I said, lucky.

I’m not retelling this story to say “hey, I survived an accident!”, but to urge people to please, please watch out on the roads. And not just the motorists, but us cyclists too! I didn’t see him until he was right there, and it was too late for either of us to change our direction or speed of travel.

Please be careful out there! 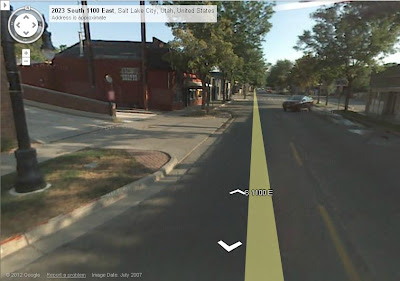 The location of my accident, He was traveling north (towards the top of the picture), and turning into the driveway on the left. I was riding beside the line of cars heading south. 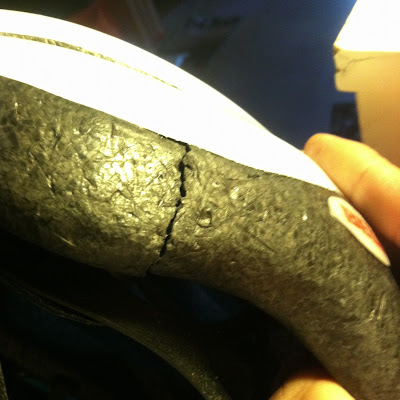 If I wasn't pro-helmet before (I was), this convinced me to always ride with one. A new helmet has been ordered and is on it's way!

I called the insurance company for the driver, and it appears that he let his insurance lapse.  ﻿The expiration date on the insurance information he gave the responding officer showed 4-24-12, and the Insurance adjuster said that they were unable to reach him at the number he gave them. They told me that will send a letter, and he has a week to respond.
Posted by Bike Junkie at 12:15 PM