What do you get when you combine night, bicycles, ghost stories and local legends, hot apple cider, a group of people and possibly a cemetery*?

If you are in Provo, and it's around Halloween, you get the Provo Cycling Ghost Tours. The ride was thought up by college students Derik Flanary and Max Orton. As Max told me and my wife, He heard about a bus ghost tour up in Salt Lake, and he wanted to do something like that down in Provo, but he didn't have access to a bus. He did have a bike, however...

The ride is a casual, flat five mile night ride through the neighborhoods of Provo, with occasional stops at places of historical and supernatural significance. At each stop, the guide tells about the history of the place, and some of the supernatural phenomena that had been reported. This isn't a "fright ride" - no one jumps out of the bushes to scare you (I'll come back to that later).

My wife and I caught wind of the ride through their Facebook page, and decided that would be a fun date. Unfortunately, due to our schedules, we weren't able to go until this past Saturday - which was the last ride of the season. Thankfully, November 2 was unseasonably warm and dry this year, so a light hoodie and gloves was all we needed to keep warm. We rode at a nice, easy pace and stopped frequently for stories. The guides also had a "ghost meter" which was supposed to pick up on the electromagnetic fluctuations that indicate spirits are near.

Our ride included stops at the old mental hospital, the hotel where Gary Gilmore commited one of his murders, the tabernacle (where hot cider and donuts were served) and may or may not have included a ride through the cemetery*. I mentioned previously about there not being any "scares" on this ride? Well, on our ride, that wasn't exactly true. At the last stop, which was a "creepy old church", as the guide was telling us about its history, we started hearing some loud banging and screaming coming from the top of the steeple. I'm not saying if it was ghosts or some teens, but a couple of the helpers seemed genuinely unnerved by the noise. Either way, it was a fitting end to our ride.

The wife and I had a great time, and at $5 a couple (if you bring your own bike, they had a few bikes you could rent for an additional fee), it is a great date nite bargain! here's hoping they do this again next year! 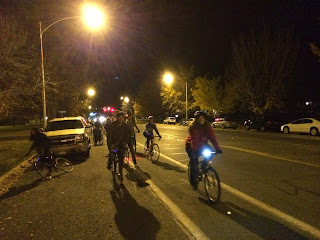 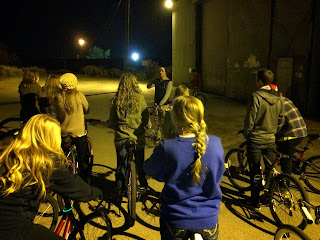 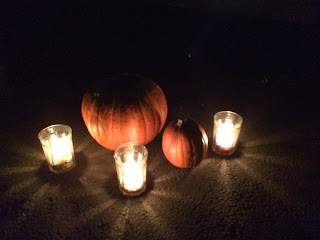 *The cemetery is closed to traffic after dusk, so I can not confirm that we went through the cemetery.
Posted by Bike Junkie at 9:26 AM

Great post! Thanks for all the kind words. I'm glad you both had a great time!