It's Friday, and I Don't Have a Good Post Title for Today

Before we get into the meat and potatoes (I wonder what the vegan alternative to that would be? Seitan and potatoes, maybe?) of today's post, I just want to say that this is post #1101. Wow, never has so little been said with so many words. Thanks for sticking around and reading.

Anyhow, yesterday I had a revelation. I noticed something on my morning commute - or more precisely, I noticed that I no longer notice something.

My leg. You remember, this guy that I broke last May. 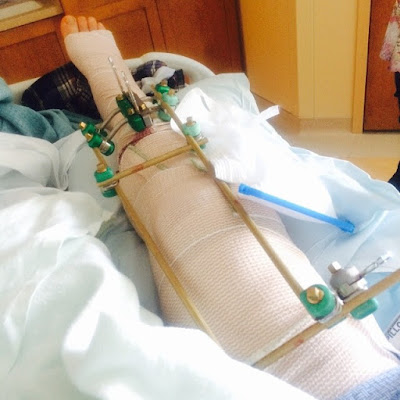 I don't mean in the same way an amputee notices his leg is missing, but in the way that it doesn't bother me any more.

Over the past year, I've gotten used to a certain dull ache coming from the lower right appendage, a lack of strength compared to the other leg, and a general sense of unbalance.

Yesterday, as I was riding, I noticed that none of that. My right leg felt, well, normal. I was able to push just as hard with the right leg as the left.

I still don't have the full range of motion, and its entirely possible that I will never get that back, but as far as cycling goes, it feels great to not feel broken any longer.
Posted by Bike Junkie at 8:30 AM