Rare is the opportunity for me to review a whole entire bicycle. Normally, I just get to review bits of one at a time, but thanks to Oyama, I have a complete bicycle at my disposal.

Oyama has been in the bicycle business for 50 years, providing the technology behind some of the biggest bicycle brands in the world. In 1998, they started to produce folding bicycles under their own name. later this year, they will introduce their folding bicycles to the USA.

I was introduced to Oyama at Interbike last fall, and they were gracious enough to send me their CX16D model for testing. 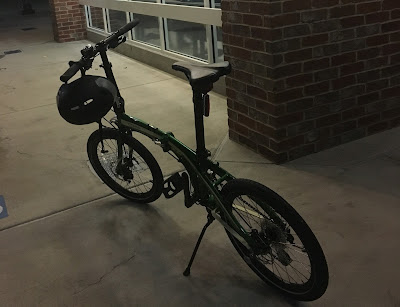 Waiting at the train station for the ride into work.

The CX16D has 20 inch wheels, so its folded size isn't the smallest out there, but it is small enough to fit under my desk at work. 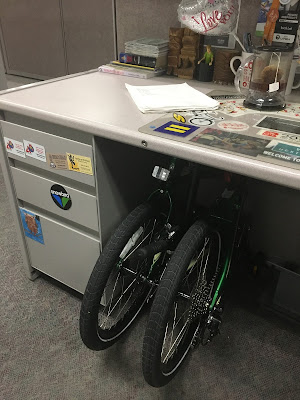 It weighs in at about 28 pounds, light enough to carry without being too awkward. Stopping power is provided via mechanical disk brakes front and rear, and propulsion is provided by a 52/42 chainring and 8 speed 11-32 cassette.

The most asked question, right after how do you fold it - which I will get to in a moment - was how does it ride? The handling would best be described as "nimble" the short wheelbase and steep head tube angle give it a quick response. the gear range is more than adequate to tackle any hills along your commute. The upright position is comfortable, and doesn't feel cramped.

Speaking of commutes, most people look at a folding bike as a means to get to and from other means of transportation, such as riding to the train station or bus stop - which I have done several times, But I also have ridden it all the way to and from work, plus to other locations a fair distance away. There occasionally is a need for my wife to pick me up after work and, its much easier to toss a folded bike in the back of her Honda than a full-sized bike - especially if we have kids with us. 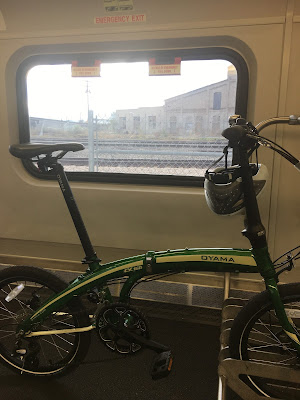 On the train. If it isn't crowded, it is still easier to keep it unfolded for the commute.

Folding... It is easy to fold, but there is an almost origami-like aspect to folding it correctly. You need to rotate the bars to the correct position and have the pedals oriented in a certain way to successfully fold the bike, but the learning curve is small and you easily learn how to fold and unfold it quickly.

My opinion? It's a great bike! easy to ride and easy to fold.

The MSRP for the Oyama CX16D is going to be around $990. More information can be found at www.oyama.com