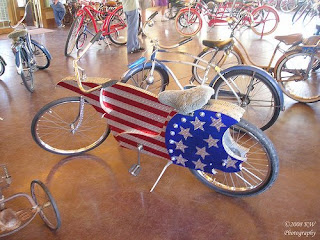 It is by riding a bicycle that you learn the contours of a country best, since you have to sweat up the hills and coast down them. Thus you remember them as they actually are, while in a motor car only a high hill impresses you, and you have no such accurate remembrance of country you have driven through as you gain by riding a bicycle."
- Ernest Hemingway, By-Line

"I'll tell you what I think of bicycling. I think it has done more to emancipate women than any one thing in the world. I rejoice every time I see a woman ride by on a bike. It gives her a feeling of self-reliance and independence the moment she takes her seat; and away she goes, the picture of untrammelled womanhood."
- Susan B. Anthony 1896

"As a social revolutionizer, the bicycle has never had an equal. It has put the human race on wheels, and thus changed completely many of the most ordinary processes and methods of social life. It is the great leveler, for not till all Americans got on bicycles was the great American principle that every man is just as good as any other man fully realized. All are on equal terms, all are happier than ever before."
- New York Evening Post, June 2, 1896

When man invented the bicycle he reached the peak of his attainments.? Here was a machine of precision and balance for the convenience of man.? And (unlike subsequent inventions for man's convenience) the more he used it, the fitter his body became.? Here, for once, was a product of man's brain that was entirely beneficial to those who used it, and of no harm or irritation to others.? Progress should have stopped when man invented the bicycle.
- Elizabeth West, Hovel
Posted by Bike Junkie at 3:39 PM