Park(ing) Day was originally invented in 2005 by Rebar, a San Francisco art and design studio as a way to challenge people to rethink the way streets are used and reinforces the need for broad-based changes to urban infrastructure. Additionally, it is an opportunity to celebrate parks by creating temporary parks in public parking spaces.

Since 2005, Park(ing) Day has blossomed into a worldwide grassroots movement: 2008 included more than 500 "PARK" installations in 100 cities on four continents.

This year, the project continues to expand to urban centers across the globe, including first-time PARK installations in South Africa, Poland, Norway, New Zealand & South Korea. (from flyer I was given at the "park")

I first heard about Park(ing) Day last year through a San Francisco based podcast. When I found out that the 19th was National Park(ing) Day, I did a quick search to see if anyone in SLC was setting up a "park" I found that the IBI Group, a downtown design firm, was setting up a park (from this point, quotations will be omitted as being superfluous, and highly annoying) only a couple of blocks away from my office. At lunchtime, I headed out to see what I would find. At the park I met Mark with the IBI group. Mark is the person responsible for setting up this installation for the past 3 years. We had a good talk about why he does this, and what goes into creating a park in the space of two parking spots along a busy road.

I took several pictures with my phone, and also managed to get a quick interview with Mark. Take a listen to the first ever Bike Junkie audio interview. -- (okay, I am having some problems figuring how to insert an audio file into my blog post. Enjoy the pictures for now. I'll update the post once audio is available.) 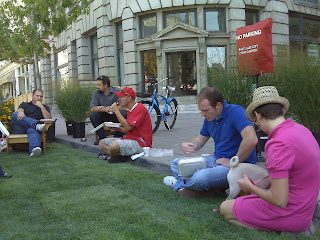 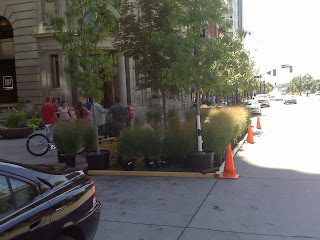 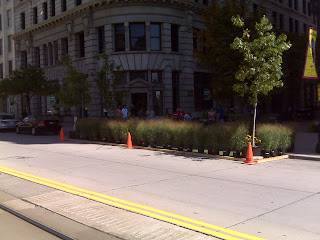 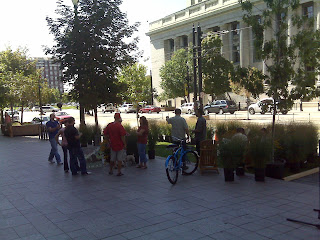 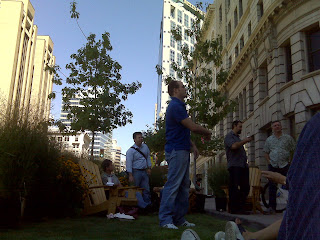 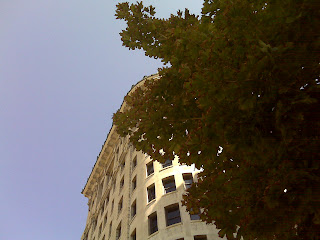 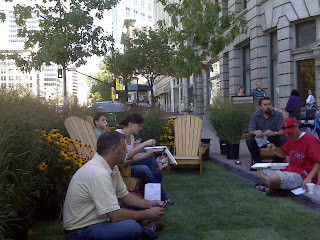 As an occasional bicycle commuter, I am of course in favor of anything that could lead to safer, more integrated streets. During my time there, several people walked past with questioning looks on their faces. As far as what the cars on the street thought, I didn't hear any honking, and I couldn't see if there were any puzzled looks on their faces (mainly because of my position, which was lying down on the grass, with the bushes blocking my view of the street). Sometimes drivers forget that they're not the only ones that use the streets. Events such as this, and to some extent Critical Mass when it started out (disclaimer: I have never participated in a critical mass, any information I have about them is definitely third-hand) let drivers know that they need to share the road.

As I was walking around the park, taking pictures, I was approached by a reporter with the Deseret News who asked me about my thoughts on the park. You can read the article here. More information about Park(ing) Day can be found by visiting the offical website: http://www.parkingday.org/
Mark and his group did a great job designing and creating a park in the middle of the town. They also created the park with an environmentally sustainable mindset. All of the sod and plants were re-used in a local residents yard, and the flyers were printed on recycled paper. My thanks to Mark, and IBI Group for taking this on for the past 3 years, and for giving me the opportunity to interview him. Hopefully you can hear it soon.
**update**
I was able to get the interview with Mark online. You can listen to it here.
Posted by Bike Junkie at 10:33 AM

Great coverage Kendall! Thanks for the article!

Thanks Mark! I hope to have the audio, even just a link up soon.