Almost since we brought that infernal little white box called the Wii into our home (kidding, I actually enjoy playing it) I have wondered if they would ever make something to simulate cycling.

It seemed like a no-brainer. You have a game console that tracks the motion of a wireless control and translates that motion into on-screen movement. The Wii has used that to simulate such sports-related activites such as bowling, golf. archery, baseball, jogging, fishing, and the list goes on... but no cycling.

I've done searches on the interweb previously which have netted exactly 0 results.

I came across this picture on this site. 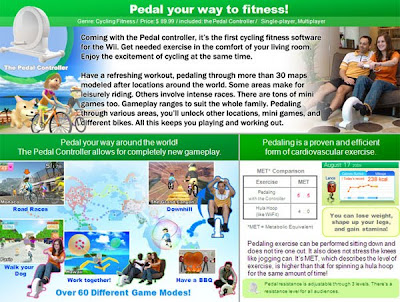 Is it legit? Don't know. Does it look fun? Absolutely. Will it replace going outdoors and riding an actual bike? For me, no. For some? Very possible.

The other site listed the price as $89.99 (not surprising, that seems to be a comfortable price point for Wii, seeing as how the original Guitar Hero bundle as well as the Wii Fit bundle both were that price), but said that they couldn't tell if it was a Nintendo, or 3rd party accessory.

Email ThisBlogThis!Share to TwitterShare to FacebookShare to Pinterest
Labels: Wii