The Amgen Tour of California, the largest, and most well known stage race in the United States has announced the route for the 2010 race. Instead of listing the stages on the blog, go to the AToC website. 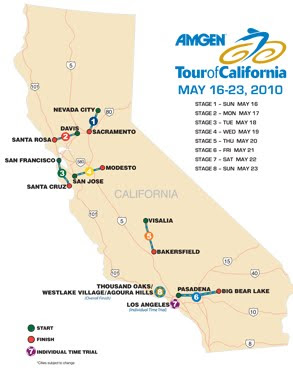 Traditionally, the Tour of California has been run in February. Last year this proved to be a slight problem, as the cyclists ran in to some weather, including snow on some of the climbs. for 2010, the organizers have moved the tour to May 16-23. While that should be better as far as the weather goes, it does present another problem. The Giro d'Italia traditionally is ran during the month of May. This may prove to be a problem for the Tour of California (AToC) as they will have to compete with the Giro for the top teams and riders.
Thanks to the magic that is Twitter, four of the top American riders have already announced that they plan on riding the AToC: 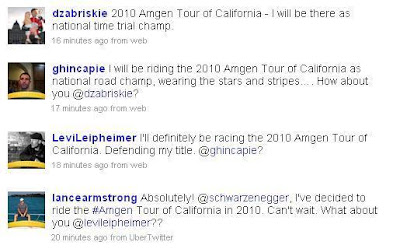 Yes, Lance Armstrong, Levi Leipheimer - 2009 AToC overal champion, George Hincapie - US National road champion , and Dave Zabriskie - US National time trial champion have personally announced that they will be riding in the states instead of Italy come May. As the year wraps up, and the Pro teams decide on their racing schedules for the upcomming year, we will hear more about which teams will be riding in California.
Posted by Bike Junkie at 10:16 AM