The first bike commute of the year

I have a great commute story this morning.


Last night, I looked at the weather forecast. It said that today was going to be in the 50’s with a 30% chance of rain – I took that to mean that there’s a 70% chance of it not raining, so I decided to ride to the bus stop this morning.

I’ve mentioned my commute before, but to recap, I have a 5 mile ride from my house to the bus stop. Roughly 75% of that commute is on a shared-use path that runs along the only road from my subdivision to the part of town where the bus picks us up. For about 3 miles of the commute, there is nothing. No houses, no street lights, no buildings of any sort. Just the road, path, and lots of tumbleweeds and fields. Nothing. 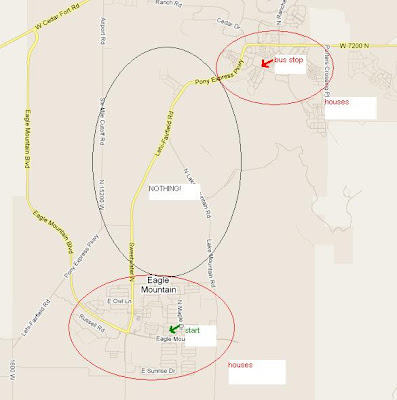 Nothing, except the antelope that I’m convinced are waiting out in the field, just out of the range of my lights. Waiting to attack!

I also should mention that at this time of year, my morning commute is in almost complete darkness. Only my tiny little light, and the lights of the passing cars – which are more of a curse than a blessing. The car’s passing lights throw up some interesting shadows in front of me, sometimes making me think that there’s something else there. AAAAHH, ANTELOPE!

Enough of my (very real, and not at all irrational) fears, back to the commute.

So, I’m about a mile into “no-man’s land” enjoying the first commute of the year. My tiny little light is seeming a bit dimmer than usual. Probably need to change the batteries I’m thinking to myself as I ride along. The occasional passing car is creating strange and unusual shadows across the path,

AAAAAAHHH!! (not for effect, I actually said this)

About 2 feet in front of my wheel, a runner appeared out of the blackness. No blinky or any other light, no reflective clothing, just some person getting in their morning run. It took me by such surprise that I did yell out loud, probably scaring them. If so, it would only be fair since they scared the hell out of me!

The remainder of the commute was without incident. Nothing else jumped out at me, but I was definitely on guard until I reached the safety of the street lights and houses.

I’m going over to my local bike shop to buy a better light today.
Posted by Bike Junkie at 8:58 AM

Very nice....I felt like I was right there with you on your first commute of the year. Great to see you getting out as I know how long you've been waiting for this.

Thanks for my morning chuckle. I've actually heard that scream from you on a couple of occasions; I could actually see this whole thing play out in my mind. Best you get a better light soon, since we'll be having dark mornings for a while yet.