Day 2 of the OutDoor Demo started off bright and early for me. One of the various events that is going on during Interbike is the Tour de Lake Mead – a 23 mile ride from Bootleg Canyon down to Lake Mead, up to Las Vegas Bay and back. What makes the ride popular is that you get to take one of the demo bikes from the various retailers on an extended test ride. That is if you get there in time on Monday to reserve a bike.

Since I didn’t make out to the demo until 2:00 on Monday, I was finding that more than a little difficult. Everyone was telling me that all their bikes were already going out, or that they didn’t have any bikes to send out for the morning. Then I stopped by Moots. They told me that all their bikes were going out, but they would be happy to put me on a waiting list, in case someone didn’t show up.

I showed up expecting not to ride, and was pleasantly surprised when I was told that they had a Vamoots CR for me to ride! 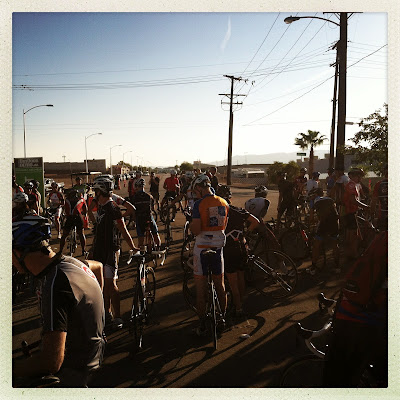 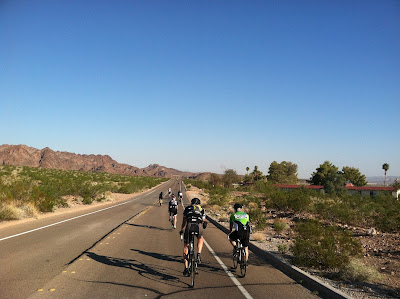 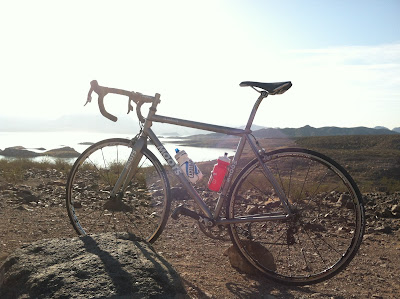 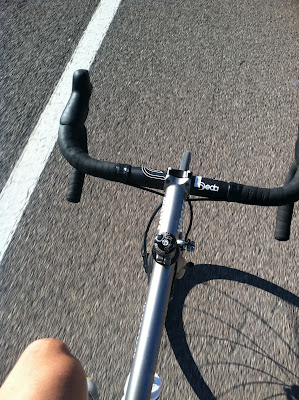 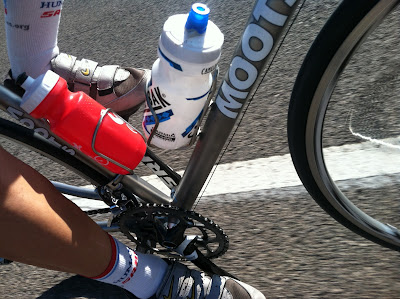 One of the reasons that I was particularly happy I was able to ride the Moots, is I haven't ridden a titanium bike before this time. Compared to my aluminum bikes, or to the carbon bikes that I have ridden, I found the ride of the titanium moots to be smooth, but not flexy. The road chatter that I am accustomed to on my aluminum Specialized was absorbed by the Moots. I came away from the ride with a newly earned respect for the metal, and a new bike on my wish list.

After the Tour de Lake Mead, I wandered around the OutDoor Demo looking for something unique. I wanted to take some more bikes out for test rides, but I didn’t want to go out just for the sake of going out. I wanted unusual.

While I was looking around, the Ride2Recovery group arrived from their 30+ mile ride that started at the Sands Convention center earlier that morning. 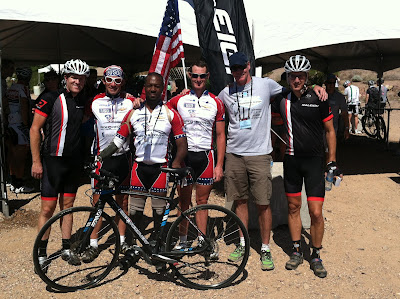 If you are not familiar with Ride2Recovery, it is a mental and physical rehabilitation program for our country’s wounded veterans that features cycling as the core activity. Among the cyclists to make the trip was Delvin McMillian, a quadriplegic amputee who rode a road bike that was specially modified to allow him to shift and brake. So inspiring!

One of the bikes I had to ride was the All-Wheel-Drive bike from Tretta that I saw yesterday. 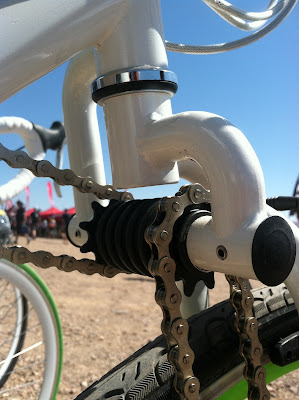 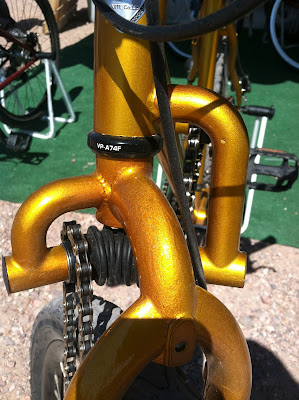 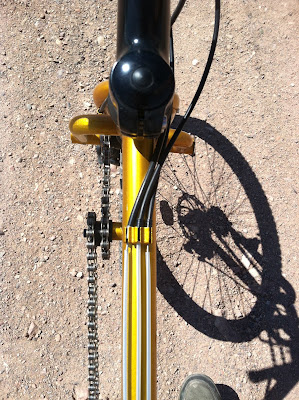 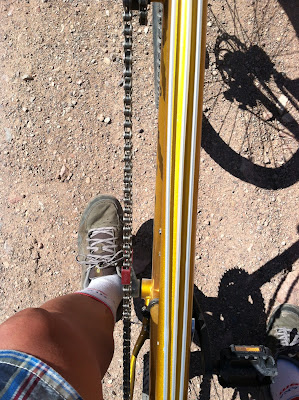 It needs to be said that the Tretta AWD bike is still in the prototype stages.

I don’t know exactly what I expected from it, but I was surprised at how normal it felt riding it. I noticed the front wheel grabbing when I started pedaling, which was the only indication that something was different. The addition of power to the front wheel helped negate the fact that the bike tipped the scales at what I am sure was something north of 30 lbs.

What wasn’t the greatest about it was the fact that the universal joint that transferred power from the cranks to the front wheel constantly clicked while pedaling. Also, when I took it on to anything but a mild dirt road, the chain running along the down tube would start slapping me in the calf and thigh.

One of the reasons I love bikes, is that they are such simple and elegant machines. The pipe-works mishmash between the head tube and fork completely detracted from those smooth and flowing lines. I don’t see the Tretta AWD taking over the bicycle industry. It will end up in that niche market that is home to bikes such as the shaft driven bicycle, and other bicycles that tried to answer the age-old question that no one is asking.

I only made it out on one other bike, and this one was possibly my favorite bike of the day. 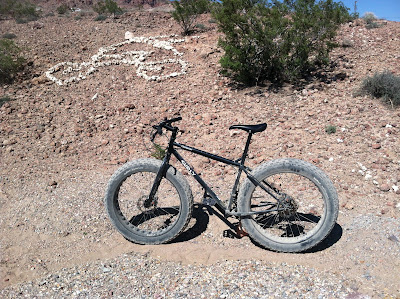 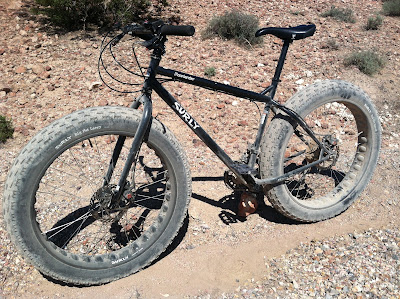 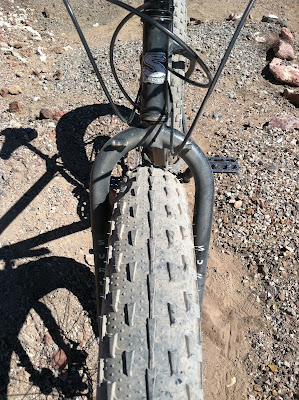 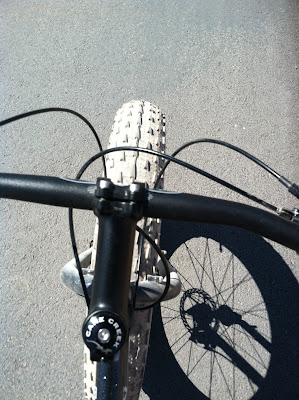 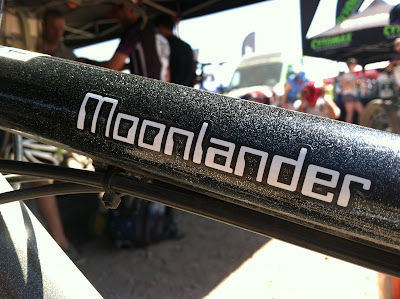 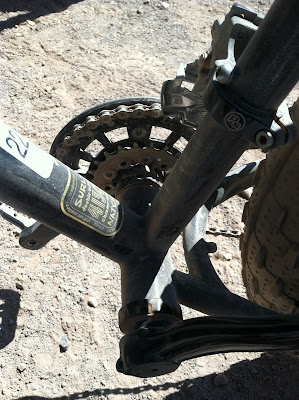 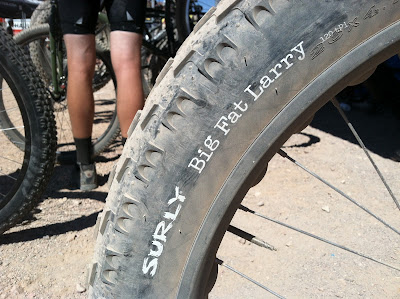 The Surly Moonlander is certainly an attention-getter. Huge 4.7” tires definitely draw the stares and comments. People who hadn’t taken one out for a test ride were asking if it was heavy, how it rode, and if it was hard to get started. Well, it isn’t a featherweight (steel frame, freakin’ huge tires and wheels), but it wasn’t as heavy as you would think and thanks to the gearing, it wasn’t at all hard to get going.

The ride? It was an absolute blast to ride. It floated over everything in its path. One of the guys at the Surly tent described it as a “bouncy castle on wheels”, and I really can’t disagree with him. I would love to take it out on a beach, or on a snow packed trail in winter. Definitely a bike I would love to have in my stable of bikes (hint, hint).

I spent the remainder of the day wandering around, seeing Elvis, drooling over the brightly colored baubles at Chris King etc… 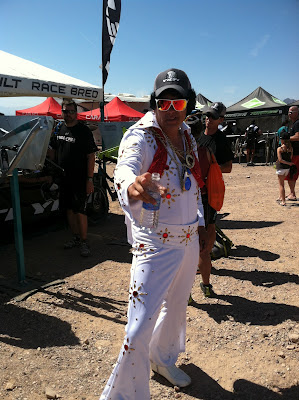 It must be a Nevada state law that Elvis must be present at any event or gathering. 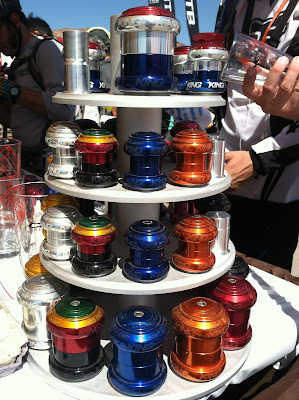 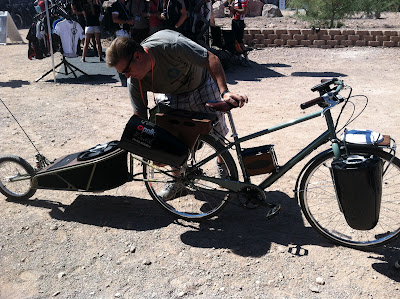 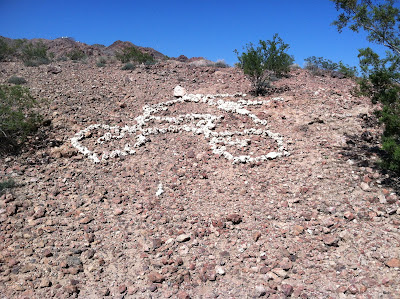 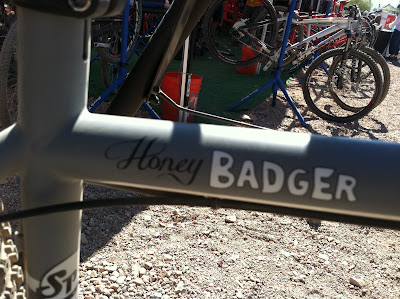 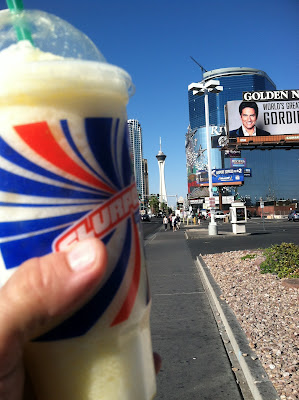 Best way to beat the heat on the walk back to the hotel? Definitely a contender.

I'm still bummed that I never got to Las Vegas in time for the demo days, but your coverage is great. Actually makes me more bummed that I wasn't there....hahahaha.