Finally more Interbike pictures! Sorry for the delay, I actually misplaced my thumb drive with all of the pictures on it, and just finally managed to track them down.
﻿
For the past 7 years, Cross Vegas has been a part of the Interbike nightlife. With 3 races, and a festival atmosphere, it is one of the not-to-miss events of Interbike.

This was my first cross race to attend, and to shoot. What a blast! It was a great event, and a great party! There were three races, the Wheelers and Dealers (bike industry people) race, the Elite Women's and the Elite Men's.

The first race was definitely the most fun, with costumes (or lack thereof - there was a guy riding in his tidy whities), and a more laid-back attitude than the elite races.

I'll just stop talking now, and get on with the pictures. 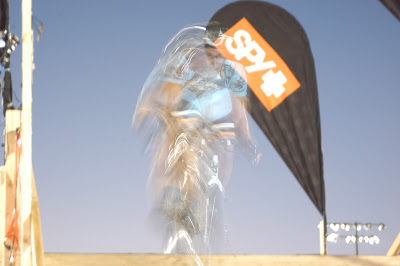 I borrowed the camera from my girlfriend, and was still trying to figure out the settings, plus it was dark and I was having trouble syncing the flash to the shutter. 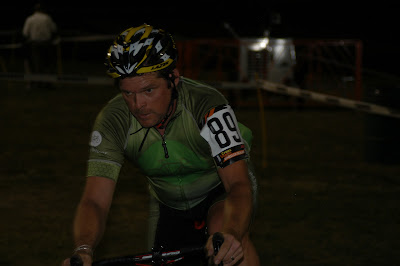 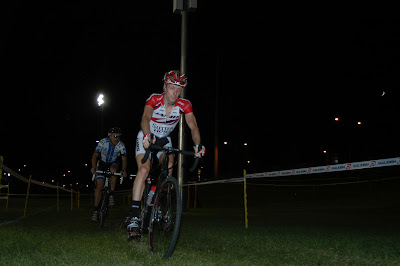 A couple of pros were spotted in the field. Here is Tyler Wren with Jamis Sutter Home. 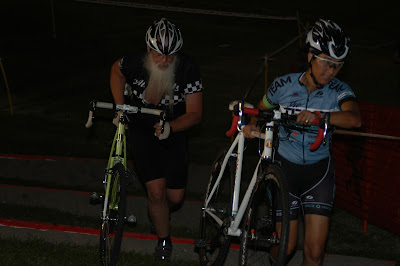 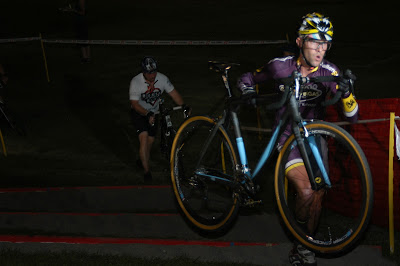 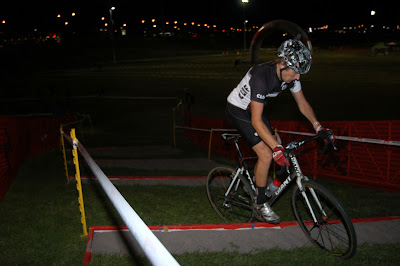 Most carried their bikes over the barriers, some tried to ride them out. 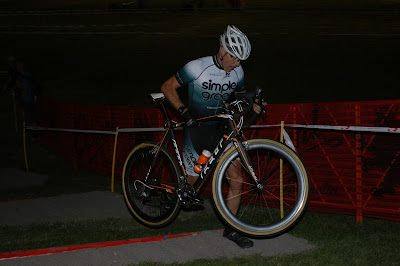 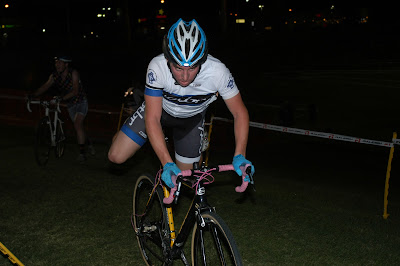 Out on the course, I found this guy handing up marshmallows. He didn't have a lot of takers, but there were some who wanted that extra sugar rush. 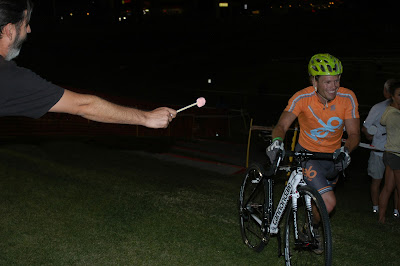 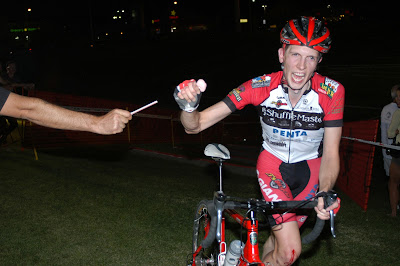 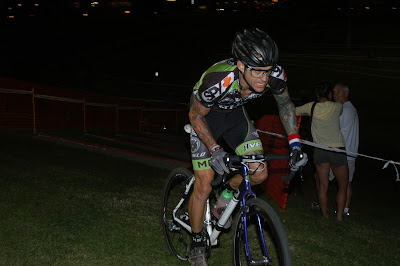 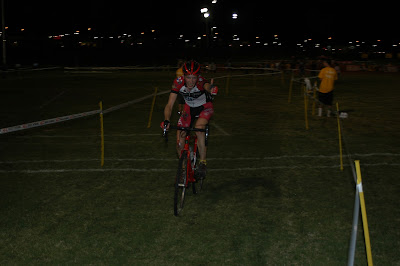 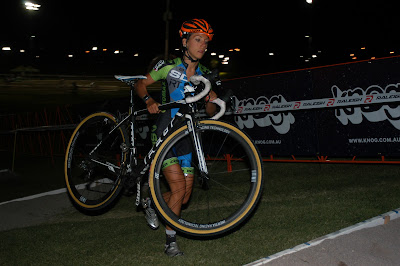 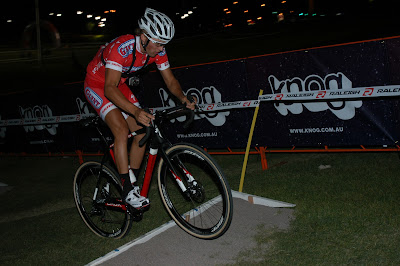 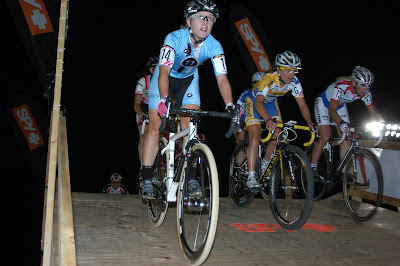 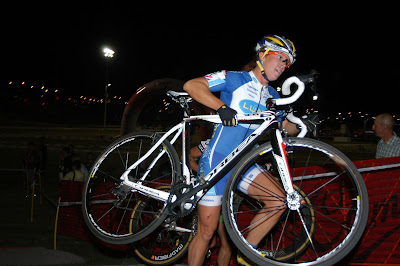 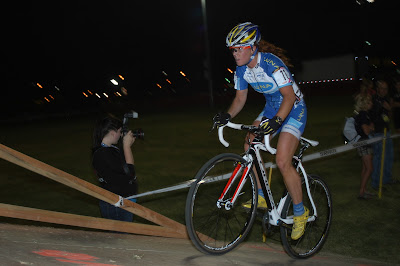 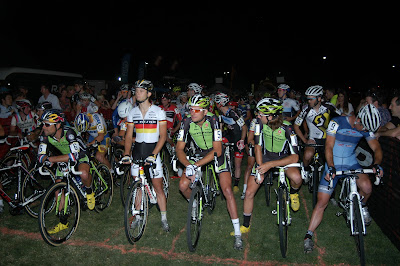 During the Elite Women's race, I saw one of the racers trying to stuff a couple of dollar bills into her top. I knew that there was a certain person who's signature style is dress up in a ghillie suit, and hand out money at local races up here in Utah. I tracked down one of my friends who was also doing photo at the race, and she confirmed that "Gilly" was indeed there. 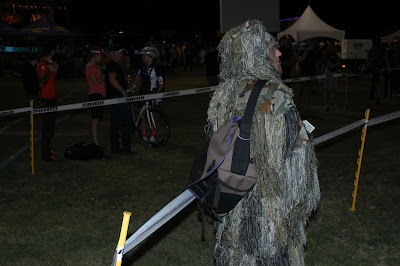 Some additional searching (you wouldn't think a guy wearing a ghille suit would be so hard to find!), and I found him. So, I spent the rest of the Elite Men's race following him around. 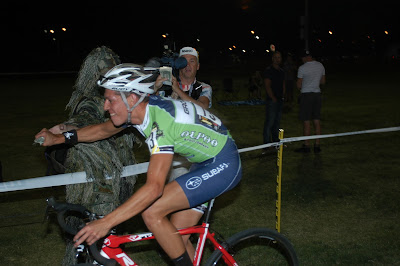 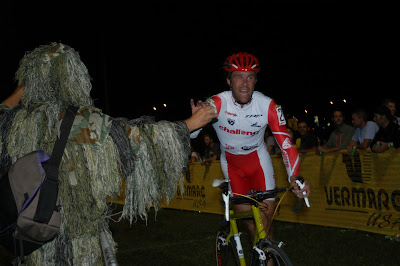 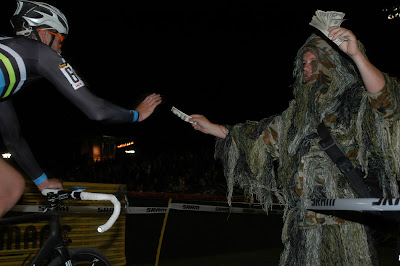 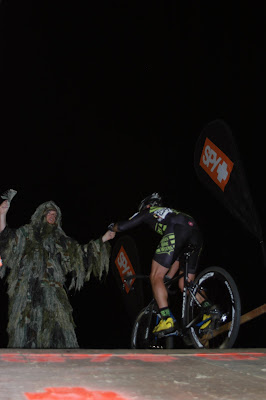 During the race, a came into the posession of a couple of beverages. I offered Gilly one, and he promptly took it up to the bridge and gave it to the next rider who passed. That rider, #62 had DNF'd, and was riding the bridge loop over and over, collecting money from Gilly for a couple of (shortened) laps. After the first beverage handup, I gave him the other can, and he shook it up. When Alan came back around, the two of them got into a spray battle on the top of the bridge. THAT is when the officials took notice, and decided to kick Gilly off of the bridge. 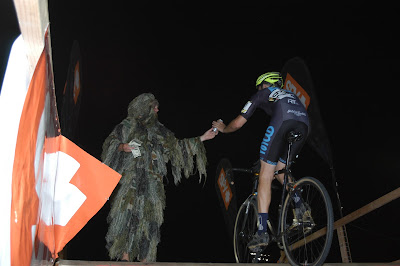 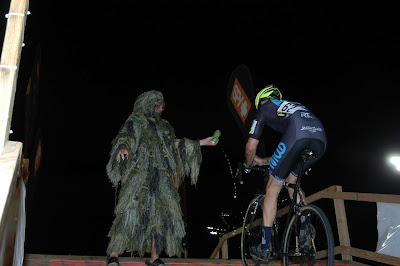 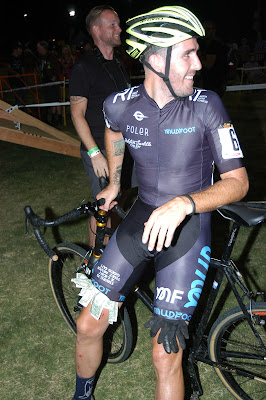