This year, the Tour of Utah will truly be a tour of Utah - not just the Wasatch front.

The announcement of the host cities happened earlier today, in Cedar City - which led to speculation that at least one of the stages would happen south of Provo. Well, it turns out that speculation is indeed correct. 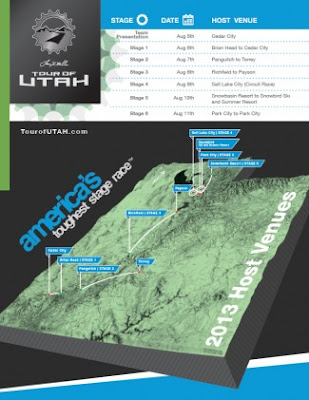 The Overall Start on Tuesday, August 6 makes its debut at Brian Head, the highest resort town in the U.S. A premier winter destination in southwest Utah, Brian Head is surrounded by the alpine forests of the Markagunt Plateau, including the Dixie National Forest to the east and Cedar Breaks National Monument to the south. Brian Head is also the third highest incorporated community in the nation with a base elevation of 9,800 feet.

Cedar City, known as "Festival City, USA", is a vibrant community 45 minutes to the west of Brian Head Resort. It is located on Interstate 15 approximately 250 miles south of Salt Lake City. Cedar City is the home to Southern Utah University and the Utah Shakespeare Festival, which gave the city its nickname and earned the regional theatre a Tony Award (2000). In addition to hosting the stage finish for Stage One, Cedar City will also present the Team Presentation Event on Monday, August 5.

Stage Two will begin in Panguitch, just northwest of the entrance to Bryce Canyon National Park. It is part of the National Historic District and the county seat of beautiful Garfield County. The small agricultural community, named for the Paiute Indian word for "big fish", sits in a valley with rivers and lakes that is bordered by the Dixie National Forest. The official start line on Wednesday sits at 6,600 feet above sea level. Stage Two's finish will be hosted by Torrey, a small community situated in the heart of red canyon country in the shadows of 11,000-foot Thousand Lake Mountain. It is just 10 miles west from the unique geologic formations at Capitol Reef National Park. Torrey Town is best recognized by the 100-year-old cottonwood trees that canopy Highway 24 in the center of town.

Stage Three will bridge the central region of Utah in Richfield with Payson in the Utah Valley to the north. Richfield is the largest city in south-central Utah, nestled in the high desert of Sevier County. This mile-high city marks the midway point in mileage between Cedar City and Salt Lake City. Surrounded by the beauty of the Fishlake National Forest, Richfield is an outdoor recreation heaven. The Stage Three finish will take the Tour to the south side of Utah Lake, where Payson rests in the shadows of the Wasatch Front. The scenery in Payson has made this a popular location for the film industry, as it was the location for “Footloose” and the television series Touched by an Angel. The Tour has passed through this section of the Provo-Orem metropolitan area in previous years, but this is the first time it has hosted a stage finish.

Salt Lake City will return for a sixth year as the host city for Stage Four of the Tour. This Friday contest will feature a popular multi-lap circuit that will begin and end near the state Capitol. Salt Lake City Mayor Ralph Becker has declared 2013 as "Year of the Bike" and hosting a circuit race, similar to the challenging 80-mile route from 2011, is one of many planned events. Expanding and improving the "bikeability" of Salt Lake City is just one of the major aspects of Mayor Becker's Livability Agenda, a plan aimed at keeping Salt Lake City one of the best places to live, eat, work, play and do business. Last year Salt Lake City hosted two stage finish lines.

Saturday's affair is known as the "Queen Stage", which is the grand day in the mountains for the climbers. Snowbasin Resort debuts to host the new start for Stage Five on August 10. During the 2002 Olympic Winter Games, Snowbasin gained attention as the host men's and women's Downhill, Super G, Combined and Paralympic ski events. As a warm-weather mountain sports venue just 20 minutes east of Ogden, Snowbasin offers mountain-top dining and many miles of scenic biking and hiking trails. The summit of Mount Allen reaches an altitude of 9,366 feet, while the base elevation of Snowbasin is 6,450 feet.

Snowbird Ski and Summer Resort returns as the official finish host venue for Stage Five for a sixth year. Well known for its steep freeskiing terrain and abundant powder in the winter season, Snowbird is a cool air mountain haven in the summertime. The final ascent up the narrow and steep section of Little Cottonwood Canyon has become a popular outdoor amphitheater for spectators. This signature climb for "America's Toughest Stage Race" provides close to 3000 feet of elevation gain over 6.5 miles (9.2% average gradient).

Stage Six will return to Park City on Sunday, August 11, the second consecutive year for the Stage Start and Overall Finish in this year-round resort town. Park City is home to three year-round resorts with the Wasatch Mountains rising to over 10,000 feet. A challenging stage race will be similar to 2012, with a final epic climb over Empire Pass. Expect huge crowds to pack Historic Main Street and see the champion crowned for the 2013 Larry H. Miller Tour of Utah for the grand finale.

The race this will travel in a general south to north drection, starting at Cedar City on August 6th, and finishing in Park City on the 11th.

Notably absent this year is the time trial out at Miller Motorsports Park, but making a return is a circuit race in Salt Lake City.

The Queen stage - which traditionally ran from Park City to Snowbird - will also be getting a route change, starting in Ogden at Snowbasin and finishing at Snowbird.

This sounds like it is going to be a fantastic and scenic race! I can't wait to see what the routes will be.