This morning, I caught an earlier train and decided that I'd grab a bike and ride up to Einstein Bagels for some morning bagel goodness. I pulled a bike out of the dock, and started to pedal off towards my waiting bagel when I noticed that the rear end of the bike was acting squirrelly. A quick glance alerted me to the fact that my rear tire was without air. Grumbling, I docked the bike and went to the next bike, which was also flat. In fact all of the bikes in that station had flat tires. Not one to believe in coincidence, I suspected foul play!
Not wanting to admit defeat (and really wanting a bagel), I walked down a block to the next station to procure a bike from there. The first bike I went to at that station had a broken stem, and the next one had a flat front tire.
Seriously?!? One might think that for some inexplicable reason, the universe did not want me to have an everything bagel this morning.  Undaunted, I went for another bike, and after thoroughly checking it out, I finally rode off.
Just to be clear, this post is in no way meant to complain about the fine folk who run our city's bike share program. They do a great job, and I have on many occasions ran into their mechanic out on his rounds making sure all of the bikes are in working order. I am saying that I believe we have gotten off easy these past 3 months. I think the novelty and newness has worn off of our little system, and the punks and other dirtbags now feel free to vandalize the bikes. Even though no one in their right mind would steal one doesn't mean that someone won't try to. I remember hearing that Vélib' in Paris lost about 3000 bikes in their first year of service, and New York has had problems with vandalism before the bikes were even placed in their docks.
Problems will happen, the bikes are ridden hundreds of miles, and they are kept outdoors unsupervised. You are going to run into a pedal falling off your bike (had that happen Monday), or a flat (flats), and eventually I'm sure someone will steal a bike. All you an do is call it in, rotate the saddle 180° (the universal sign that the bike has a problem - again something picked up from Vélib') and move on to the next bike.
Update:
I took a bike out for a lunchtime ride, and decided to head south. I stopped at a little bakery out on 10th and Main, City Cakes, and ended up getting a flat.
Yes, it is confirmed, the universe has it out for me today. 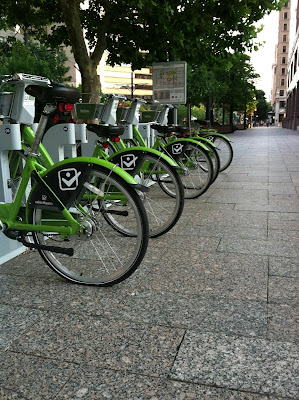 All flat. Dirtbags!
Posted by Bike Junkie at 8:53 AM