There is a little bike shop in the Calgary suburb of Cochrane, Alberta. Located above an ice cream parlor, the whole thing screams quaint.

This little bike shop has become known around the world becasue of of their involvement in a "David and Goliath" style lawsuit with one of the world's largest bicycle manufacturers - Specialized.

The name of this bike shop? Cafe Roubaix.

The reason they are facing the Legal muscle of Specialized is that Specialized has a road bike model that also happens to be named Roubaix, and they feel that this little boutique cycle shop in the Canadian suburbs will cause brand confusion.

The owner of the shop, Dan Richter, named his shop after the region in France that is most famously known of in the cycling world as the end of the venerated spring classics race, Paris-Roubaix. He doesn't even carry Specialized in his shop.

So to show support for the small guy, I highly suggest you go to Dan's site and purchase a shirt.


Specialized may own the copyright on the name "Roubaix" as it relates to bicycle frames, but their bike is not the first thing people think of when Roubaix is mentioned. Besides, there are other products that bear that name. Are they going after them next?

For more information on this sham of a lawsuit, I suggest reading Carlton Reid's BikeBiz blog.


As a bonus, because Brett is a friend and I love his t-shirts, I had to include his Paris-Roubaix(redacted) Shirt. 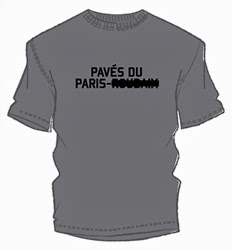 Email ThisBlogThis!Share to TwitterShare to FacebookShare to Pinterest
Labels: T-Shirt of the Day

Really I like your site,all the items are so nice and beautiful. It's all about are good collections. We have good collections of Cycling T Shirt, if you want to know about them then, explore our website.

Mark, Thanks for the kind words!

I actually discovered your site back in 2011, and did a post about Dark Cycle clothing back then: http://confessionsofabikejunkie.blogspot.com/2011/11/t-shirt-of-day.html