Rant of the Day

Yesterday I read a blog post talking about leaving your lock at work.

The article made a valid point mentioning that you could save five-ish pounds, and some space in your bag by leaving your lock at work.

The problem I have with that idea is when the locks become orphans. 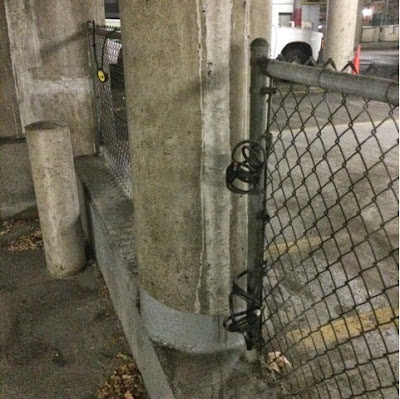 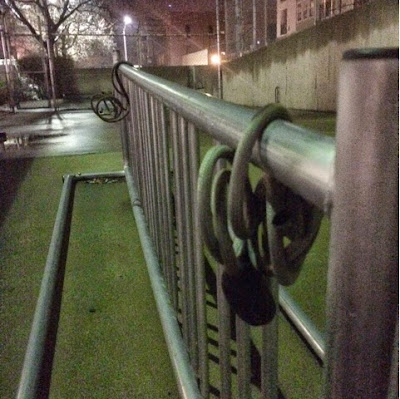 I'm absolutely sure that the owners of these locks - and the several others scattered around the racks and fences of "the place which pays me so that me and my family do not end up homeless" - had only the best intentions, and did not deliberately abandon their locks.  I'm sure that in a moment of inspiration they decided that they too would become bike commuters, and either weather, sweat, or the perceived lack of time to ride to work compelled them to abandon their lofty goals.  The locks remaining behind as either a bad reminder, or a half-hearted promise that they will try it again, once the weather or fitness improves, or they suddenly find themselves with an excess of minutes. There is also the possibility that keys were lost or combinations were forgotten.
Either way, the locks remain.
When it is on a bike rack or fence, the abandoned locks become an eyesore and a minor annoyance, but they can become more than that...
I found out a couple of weeks ago from a friend and co-worker that my building has a "dedicated" bike storage room. a place safe from prying eyes (and sticky fingers) behind a locked door where one can securely store their bicycle.  I obtained a key, and went down to check out this Shangri-La.

The floors are not awkwardly curved, I took a panorama of the room.

Well, my expectations of Utopia were found lacking, but still a space in a storage/junk room in the bowels of the parking garage is nothing to turn your nose up at.

I was excited about the bike room for approximately 10 seconds. That is how long it took me to notice that anywhere that I could conceivably lock my bike (I place little trust in my fellow man) had a lock attached to it. Locks that hadn't seen a bike in months.

Okay, it is winter, and most people do fall into the fair-weather commuter crowd, but come on! If you and your bike are hibernating for the winter, do those of us who aren't a favor and take your lock with you! It's just inconsiderate and rude to "call dibs" on your spot on the wall by leaving your U-lock there all winter.
Posted by Bike Junkie at 12:26 PM

Why not attach your lock to the lock on the wall, if its abandoned, then no problems?

The problem with abandonded locks, is one does not know how long they have been abandoned, or when the owner will be coming back.
I've thought about locking up to one of the other locks, but what if the previous owner came back? All they would need to do is unlock their lock, and my bike would be easy pickings.