It's the first week of August here in the pretty great state of Utah - which used to be their logo, until they changed it.

I wonder why? Is Utah no longer pretty? Or great?

I digress, I didn't post today to discuss state slogans, I am discussing the first week of August. Two things happen during this time of the year. The Tour of Utah, which pits 120 or so professional cyclists against some pretty and great (I guess in some cases it still applies) scenery and brutal climbs as they race from Zion's National park to Park City over the course of seven days. And Outdoor Retailer, where the outdoor industry crams into the Salt Palace Convention center to show off the latest and greatest in outdoor doodads and thingamajigs. Occasionally some bike stuff ends up in there as well.

I'm not covering the Tour of Utah again this year, but I plan on attending a stage finish or two, and may or may not post pictures, depending on how crappy they are (the pictures, not the stages. Surprisingly, I have standards).

I did, however attend Outdoor Retailer - more specifically the Open Air Demo at Pineview Reservoir - where I discovered a couple of bikes, and something else.

First on to the bikes. I'll start mild and work my up (or down, depending on your perspective).

Rambo Bikes were showcasing their fat tire e-bikes which are aimed at the hunting crowd that wants to get into the backwoods to kill more quickly and silently than hiking. They have a 750W electric motor that will propel the bike up to 20mph without pedaling. 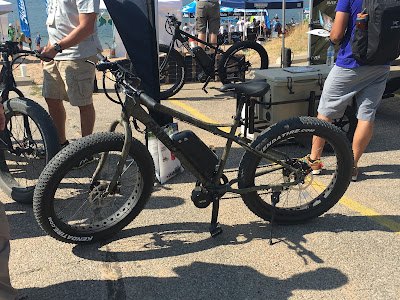 After that, I found Rungu Bikes, who were showing off their behemoth, the Electric Juggernaut, which sports a pair of fat tires up front, and is powered by a massive 2100W motor. 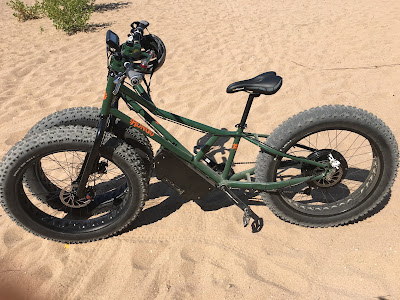 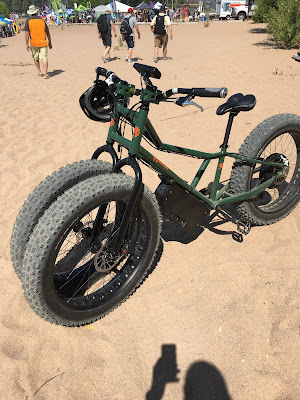 The dual tires up front aid in stability and flotation across loose sand, they also add a bit of a learning curve, so to speak, as you can't turn it like you would turn a normal bicycle by leaning.

I don't know how I feel about e-bikes. I rode both of them and they were fun, but not the same kind of fun or enjoyment I get from riding a non-electric bike. I can see the benefits of an electric assist, but where does it become less of a bike, and more of a moped?

Both companies do offer their bikes in standard, non-electric models as well.

Now, on to the "not bike" portion of the post. This doesn't really qualify as a bike, but it has a handlebar, and the motion you use to propel yourself is vaguely similar to a peddling motion. 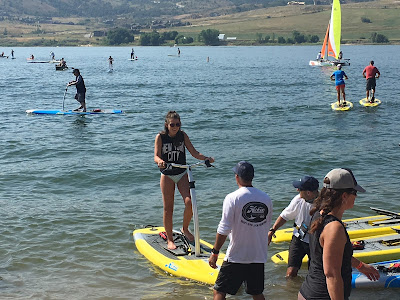 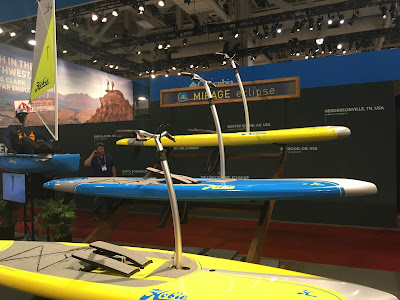 The byproduct of a strange menage-a-trois between a stand-up paddleboard, bicycle, and elliptical trainer; the Hobie Mirage Eclipse was the closest thing to a water bicycle that I have seen at Outdoor Retailer (I wish someone would bring up a pontoon bicycle to OR, you'd never get me off of it!).

The bicycle-like handlebars provide stability, and the "brake" levers are actually controls for the rudder - squeeze the left brake to turn left, etc... The pedals engage the MirageDrive fins - which in my opinion is a fairly clever piece of mechanics.

Fun in the sand and water was definitely had. I did spend the next day on the trade show floor, seeing friends and new products. I'll post more about that as products are tested.
Posted by Bike Junkie at 11:39 AM