It has been a while since I have put pen to paper - digitally speaking.

As I said in the title, this is a review that was several months, and 500 miles in the making. It started last fall at Interbike, and ended some 500 miles last month. 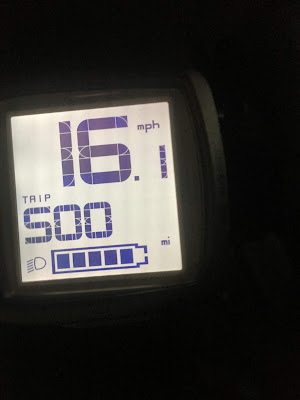 I've never really spent any amount of time on an ebike, aside from  a few short rides on cruiser ebikes at Interbike and Outdoor Retailer. So, when the opportunity to spend some time with the flagship of the Tern folding ebike line, the Vektron S10, I couldn't say no. 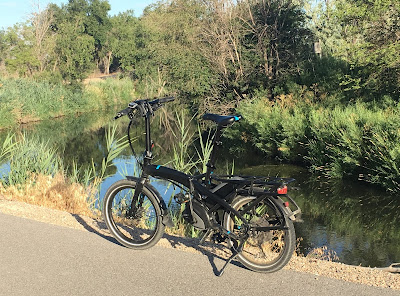 Right upfront, aside from one thing - more on that later - I love this bike. It has been a blast to ride for the past month. With the first push on the pedal, the Bosch Active Line Plus drivetrain immediately starts helping out, quickly getting the bike up to 20mph. The 400 Wh battery gives you a range from approximately 30-70 miles, depending on whether you use Eco, Tour, Sport, or Turbo modes. Once you are going, Magura MT4 hydraulic disc brakes do an admirable job of bringing you to a stop, sometimes – thankfully – very rapidly. If you are interested, the specs are here.

When I was conversing with the folks at Tern prior to getting the bike, they asked me what options I wanted included with it. There really wasn’t anything that I felt like I needed to add. The rear rack, which was nice because it let me get my backpack off my back in the nearly 100 degree weather, and the integrated head and tail lights are part of the standard package. It also has a dual telescoping seatpost, so riders from 4’9” to 6’5” can all ride comfortably. Everyone in my family, from my 10-year-old daughter to my 6’4” 21-year-old son hopped on at one point or another and took it for a spin around the neighborhood. 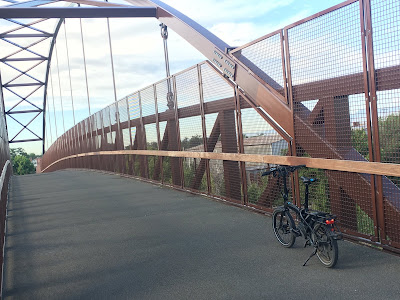 I could go thru every component on this bike and tout its exceptional qualities, but that would be boring to read. Let me just sum it up by saying that Tern did their research, and the parts spec’d on this are all stellar… 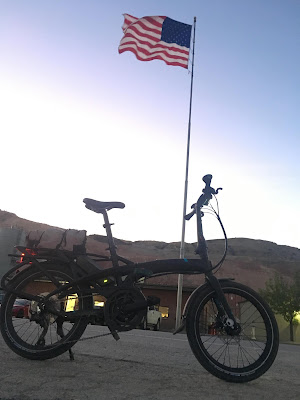 …with the exception of the pedals. Due to the folding nature of the bike, and not wanting to have a pedal sticking out awkwardly when it was folded to catch on shins, doors, and what not, Tern incorporated a quick release into the spindle of the right side pedal. My problem with this is that I’ve had it fall off on me a couple times – once when I was starting out, pushing down on the pedal that at that moment decided to separate from the crankarm, causing a painful and awkward stumble. The other time it decided to “jump ship” just as I was finishing up my commute, and was stepping off the bike.  My personal opinion, is a folding pedal would rectify the problem of having a “shin grabber” sticking out when folded, while keeping the pedal firmly attached to the bike when not. There's also no place to store the pedal when it's unattached. 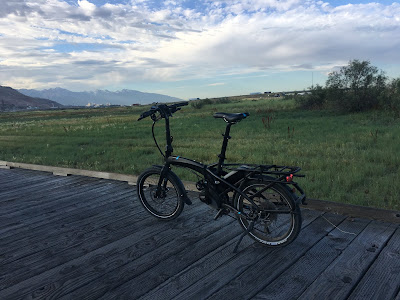 How did it ride, you may be asking yourself? Well, I have ridden some folding bikes that due to their diminutive wheel size and the geometry make handling squirrelly. I didn’t experience any of that with the Vektron S10. The handling was crisp and precise, the ride – in part thanks to the Schwalbe Big Apple tires, which are a fantastic tire if I must say, soaking up some of the bumps– was comfortable. I did the majority of my riding in Turbo mode because, if you had the option of using Turbo, why wouldn’t you? It was like having a tailwind, even when there was a massive headwind, or you were heading uphill. My commute to the day job is 9.7 miles each way. On Turbo mode, I could make that trip 3 times before needing a recharge. One time I mis-judged my range by one mile, and had to pedal the nearly 50 lb bike by myself for that last mile. It was fine, but you do feel the weight of the bike when you don’t have anyone helping you pedal.

Fortunately for me, my commute doesn’t involve any busses or trains, and my work now has a secure bike room so the only time that I had to fold the Vektron was when the wife was picking me up after work for date nite, or if we were going somewhere that riding would not be feasible. The bike folds quickly and easily to a reasonably compact size that fits nicely into the back of our hatchback, and would slide easily under my desk if needed. The weight does make carrying it folded somewhat awkward, but Tern did spec a saddle that has a rubber pad under the nose to make carrying it on your shoulder more comfortable.

There are five models in the Vektron line, from the $1999 D7i to the $3699 S10. I feel that the Vektron could be the perfect commuting vehicle. Instead of buying an inexpensive car and then having to pay for gas, insurance, and parking. You can keep fit, store it under your desk, and haul cargo - even carry a small human.

I will admit that in my past, I looked at ebikes with some derision. Considering them to not be real bikes, and the people who rode them to not be real cyclists. I was a jerk. As I have gotten older, wiser, and hopefully less of a jerk, my opinion has changed. From talking to an older couple on some mountain ebikes down at Dead Horse Point S.P. earlier this year, and realizing that thanks to their bikes, they could get out and experience the splendor of the outdoors, to my own experience of not riding home after work in nearly 100 degrees dripping with sweat and needing to change clothes. If you choose to ride a bike over other available methods of transportation whether that bike is an ebike or not , then in my opinion, you are a real cyclist. 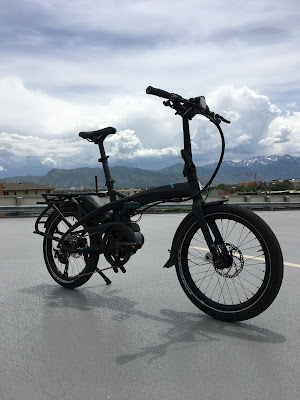 I'm seriouly sad that now the review is done, it's time to send it back.
Posted by Bike Junkie at 7:13 PM