This Saturday, I ﻿rode in the Josie Johnson Memorial ride.  This is an annual ride in Salt Lake City to help raise awareness for bicycle safety, and to honor and remember those cyclists who have been killed or seriously injured in Utah.
The ride is named after Josie Johnson, who was killed while riding up Little Cottonwood Canyon on September 18, 2004.
This year, there were three cyclists that we were riding for:  Norman Bryner, Elizabeth Bradley, and Michael Wright.
About 100 cyclists rolled out from Sugarhouse park, and headed south towards Mill Hollow Park, where a brief memorial service, and a moment of silence was held. 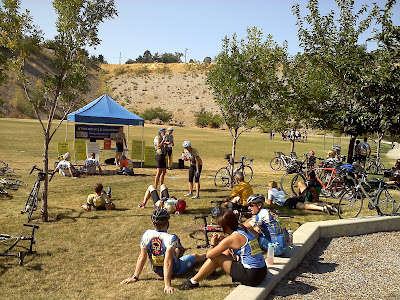 Unlike past years - where the weather has been rainy, snowy, and bitterly cold -  we rode this year in summer-like temperatures.  We had a nice, leasurely ride down Holladay Blvd. and back.  About 19 miles total.  It was nice to ride with some friends that I haven't seen in a while.
The ride is put on by the Utah Bicycle Coalition, a non-profit organization that is working to improve bicycling conditions throughout the State of Utah. For more information on what the Utah Bicycle Coalition is doing, check them out at http://www.utahbikes.org/ 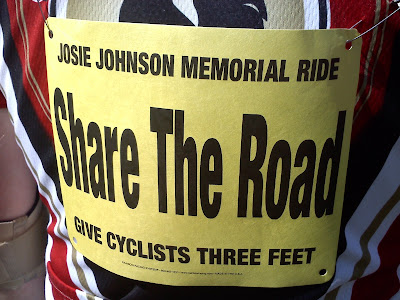 Thank you for writing this up. Josie was my cousin. Her father died the day after this....his heart was broken with the loss of Josie. (another great loss for our family) yet he fought with all his might to keep her memory alive. She was a beautiful light in this world that will forever be missed. She loved to ride her mountains and did it often!