Should I see the doctor?

It's not like I think I'm some sort of tough guy - far from it, in fact. Nor am I some sort of tightwad - we spend our money way too freely in most instances. I am also not scared of going to the doctor - but I do have an intense, almost irrational, dislike of getting a shot.

I do, however, dislike throwing money at the doctor only for him to tell me that there is nothing that some rest will not cure.

That is why I haven't been to the doctor to have my foot looked at yet.

What is wrong with my foot, you ask? Well, last week, during the Dirty Dash, I missed a step in the tire obstacle and landed funny on my left foot. It felt a little off, but it didn't hurt enough for me to DNF, so I ran on. during the rest of the race there were a few times that it felt "not quite right" so I would walk for a bit. I broke my foot 12 years ago playing a game of basketball at work in Birkenstocks. When that happened, I wasn't able to walk on it about an hour after it happened. This time, I can walk on it, although it does hurt. I figured that I just tweaked it, and It just needed some time to heal. It's been over a week, and it doesn't feel any better. It doesn't feel any worse, either. 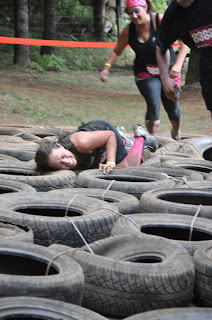 not me, but I'm sure that is what I looked like... I was also much farther thru the obstacle than this person...
I haven't been running on it, but I also haven't been keeping off of it. Cycling doesn't hurt at all - probably because the stiff soles of my cycling shoe do a great job of immobilizing my foot, and keep it from flexing unnecessarily.

So, what do I do? I don't want to go to the doctor only to have them tell me I have a little owie, but if there is something wrong, I do need to know that.  I don't want this to keep me from participating in any more triathlons - like the Turkey Tri which is coming up next month.


p.s.  I should have pictures up this week, plus a review of some compression socks that I wore during the Dirty Dash.

Update:  I went to see the doctor today, and found out that I have a minor fracture of my left ankle.  The prognosis is 3-6 weeks in a boot.  Looks like my cycling and triathlon season is over.  As I told the doctor, I would rather take care of it the correct way now, than encounter problems in the future.  I'll be back on the bike (downstairs on the trainer) as soon as the boot comes off.
Posted by Bike Junkie at 2:00 PM

Email ThisBlogThis!Share to TwitterShare to FacebookShare to Pinterest
Labels: injury, the Dirty Dash

I totally understand your dilemma....I have felt the same way many times in the past.

I'm not sure what to recommend, but maybe give it a couple more days and see how it feels.

Sorry to hear about the injury. God work on finishing! Hope it was worth it.

John at The Dirty Dash

Thanks John. It was definately worth it! I guarantee you'll see me next year!