I went into yesterday's ride with the plan of showing Mother Nature who's boss, and I ended up finding out that she is the boss.

I don't think that I have ever been as cold or as miserable on a bike ride. After 40 miles, I couldn't feel my feet at all, and pedaling was just torture. I abandoned.

My hands were just about as bad off, but thanks to the sag support from Canyon Sports who loaned me a pair of Pearl Izumi lobster claw gloves, my hands survived. I need to get me a pair of those.

The ride started off in the snow, and it only got worse after that. about 15 miles in, the trail was completely flooded - no way around it. wet feet do not make for a fun ride.

I'll be back next year! Even though it was a miserable ride because of the weather, It was fun, and they have really cool finishers medals. 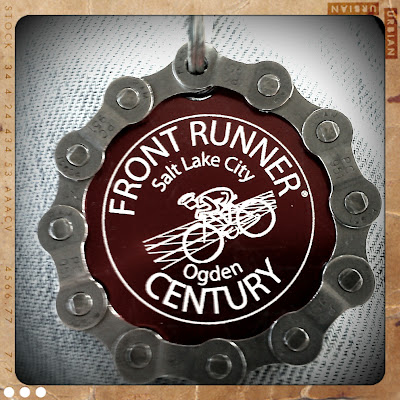 My friend who rode with me? He ended up abandoning also. His legs cramped up so badly that he couldn't pedal any longer.
Posted by Bike Junkie at 11:05 AM

I really don't think I would view it as "abandoning" the ride. You guys kicked some serious A!!! Think of how many people didn't even show up for the stupid thing, and you guys finished 2/3 of it!! That's pretty incredible to me. And you're warm today, no? Way to go, K! That's success if I've ever heard it.