This past weekend was the Tour de Cure century in Brigham City. It was a great ride, and the weather cooperated perfectly this year. My good friend, Greg rode with me - his first century - and we both had a great time.

On the way home from Brigham City, I saw this billboard no less than 6 times along the freeway 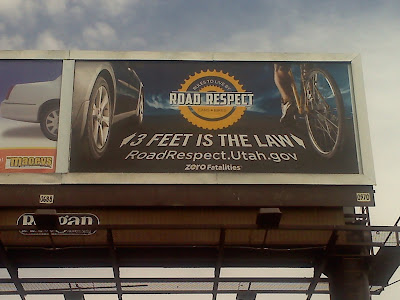 I always makes me happy to see bicycles in commercials, on billboards, and in outlets where you normally don't see them. But something like this, where they are not only promoting riding, but promoting the 3 foot law makes me especially happy.
I went to the website RoadRespect.Utah.gov, to check it out. The first paragraph on the site sums it up perfectly:

It's one of those lessons we all learned early on in life, like sharing is good. When you give respect, you get respect. And nowhere is that more true than on Utah's roads, where drivers and cyclists meet in potentially life-threatening situations thousands of times a day. The Road Respect program is dedicated to the idea of teaching both drivers and cyclists the rules of the road so that everyone respects everyone's space and everyone gets home safely.

I also learned that to kick off this new promotion, the Utah Department of Transportation, Zero Fatalities and the Department of Public Safety will be sponsoring a "Road Respect Tour" in which a group of cyclists will be riding across the state - from Logan to Hurricane - between June 13th and 18th. They will be making rally stops for community events at various locations, and there will also be "transition zones" where you can join up for a portion of the ride.

The site also has links to safety resources, and suggestions on how to ride with respect and drive with respect.