Last month, Salt Lake City unveiled plans to transform 200 S between 200 E and 1300 E into a “multi-modal public green space corridor”. What that means, is that they are planning on taking a street with 2 lanes of car traffic and a bike lane each direction and change it into a single lane of car traffic with “greenway medians, serving as reclaimed public spaces that can accommodate street vendors, community gardens, vegetable stands, as well as host events such as musical performances, street fairs, child bicycle instruction, aerobics instruction, yoga classes, and more.”. 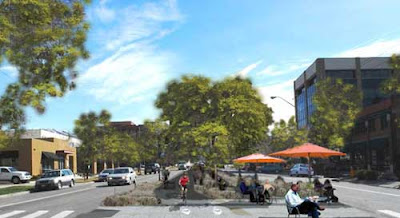 Artist's rendering of the proposed green space
200 S is the main corridor between the University of Utah, and downtown, and as such, it sees a fairly high level of bicycle traffic compared to other streets in the downtown area.

An Open House will be held on May 12th, from 4:00 PM to 6:30 PM, on the existing green median located at 200 South and McClelland St (~1050 E), in front of Coffee Noir. You can learn more about the project, see new visual material, and give the team your suggestions for the project.

Personally, I am more comfortable on the roads with the cars than on a shared use path with joggers, strollers, and kids on bikes. The only place that I will actively use a shared use path is in “no man’s land” in Eagle Mountain. There, the road is barely wide enough for a single lane each direction, and there are no shoulders. Also, since part of my ride along that stretch of roadway is during less than optimal lighting conditions, I am happy to remove myself as a potential target in that situation.

That being said, I like the proposed plans for 200 S. Anything that will calm traffic, provide additional bicycle infrastructure, and add more green public space to the downtown area is a good thing in my opinion. The artist’s renderings appear to show that there will still be enough room for those cyclists who choose to ride on the roads to share the lane with cars, leaving the green space corridor for joggers, strollers, and the like.

You can visit the city website for more information.
Posted by Bike Junkie at 10:41 AM