A Little Bit of Excitement this Past Saturday Morning

Forgive me the proud parent moment, but my 13 year old marched in his first parade this weekend with the high school marching band. 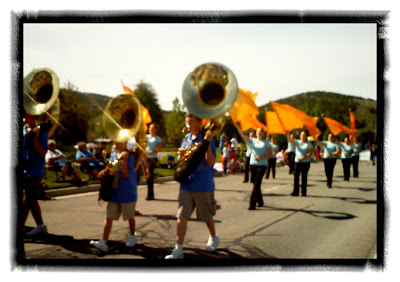 Yeah, he had to pick the biggest freakin’ instrument to play. He enjoys it, and he’s good at it.

The proud parent moment also serves as a segue into today’s post, as the event I am talking about took place as we were heading to the parade to watch the marching band, and the other 108 entrants march down the road.

Eagle Mountain is divided into two distinct areas: Town Center and The Ranches. These areas are geographically separated by about 3 miles of nothing – what I have referred to in previous posts as “no man’s land”. The road that connects town center and the Ranches - Pony Express parkway (yes, it is actually on the original Pony Express trail) - is a bad road: single lane each direction, no shoulder, narrow lanes, and an island in the middle the entire way. 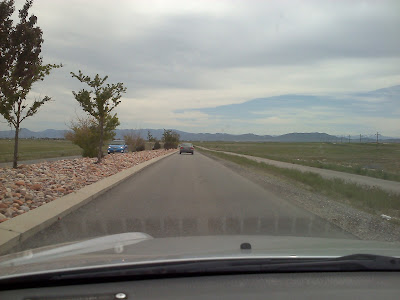 photo taken later in the day to illustrate the narrowness of the road
It is also, unfortunately, a popular cycling route.

Fortunately, the city has built a shared use path right next to the road. 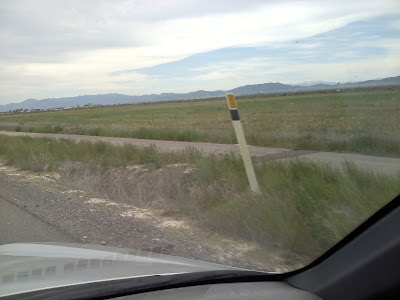 I’m a big proponent of the whole “share the road” concept and taking the lane, but I am also a huge fan of not being hit by cars. This 3 mile stretch of road is the only place where I will actively use the shared use path instead of the road.

Okay, the scene is set. Now on with the story.

We were heading into the Ranches to watch the parade Saturday morning. We had the great misfortune of being behind a truck towing a horse trailer – more than likely an entrant in the parade. About a mile into “no man’s land” the truck came across a single cyclist riding on the road. The truck slowed down to the cyclist’s speed, and was trying to get over as far as he possibly could to pass. He was next to the cyclist for about a minute, when the cyclist looked over, then back, then wobbled and swerved off the road into the gravel, and immediately went down.

He quickly jumped to his feet after he fell and went up to the passenger side window of the truck and had words with the driver of the truck. As we got our opportunity to go past, my wife asked out her window if he was okay, he shot her a dirty look and then grunted that he was fine.

Just to be clear, the truck in no way touched or physically interfered with the cyclist. I have no way of knowing if the driver of the truck said anything to the cyclist. Also, except for the bruises to his ego and pride, he appeared to be unharmed.

I wish I knew more of what went on right before the cyclist hit the ground, but from what I saw, he panicked and overreacted.

I used to ride on the road in that location, defiantly asserting my right to the road, and dismissing the path as a location for joggers and families. Enough times of having big trucks go past with their mirrors missing my shoulder by mere inches has cured me of my arrogance.

I hope that the cyclist is really ok. It’s only a matter of time before someone gets seriously hurt out there, I wish the city would either widen the road, or at least put up signs: advising the cars to watch for cyclists, or for the cyclists advising that the road is narrow and encouraging them to use the path.
Posted by Bike Junkie at 5:33 AM