Tales from the Commute: The Overly Righteous Motorist

Yes, boys and girls, it's time for another Tales from the Commute.

This morning, I was riding in as is typical.  I was also riding on my normal route, which is typical. And, I was treating the stop signs on the lighter-traffic side streets as suggestions, again as is typical.(I should pause here from the narration and address the previous sentence. Yes, I don't stop at every stop sign or light. Yes, I know that here in Utah it still is the law to stop at stop signs. But, if there is no traffic coming down the cross street, and if there is no traffic turning from the opposite direction, I do not see the point of breaking my momentum and wasting energy. I like to think that I am obeying the law - Newton's law of motion.)

So where were we? Oh yes, I was riding in, fully aware that I was skirting around the municipal traffic laws on my commute. I came up to the 4-way stop shown in the picture below, traveling in the direction indicated by the red arrow. 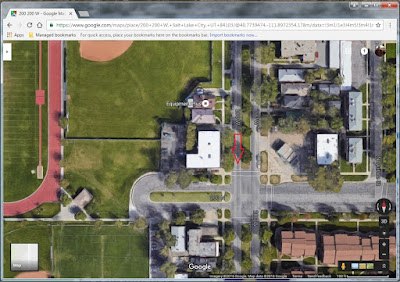 Now, at this particular intersection I never stop, nor even hesitate, because as you can see, there is almost 0% chance of any cross traffic, or left-turning traffic because the road dead ends at the high-school ball fields.

Since today was a typical commute, I was typically not stopping at this intersection, when suddenly I heard a car honking behind me rather excitedly and repeatedly. I look back to see what his particular problem is, and see an older gentlemen sternly pointing and gesturing in my general direction - and in direction of the stop sign. Figuring that I already knew what he was so upset about, I rolled up next to him at the next light to "discuss".

He rolled down his window and I asked him if there was a problem.

The conversation was going nowhere, so I rolled on up to the stop sign. Then I decided that I wasn't finished with him yet, so I flipped around and went back to his car. (At this point I should mention that due to several cues, I knew that he worked in the nearby offices of the local predominant religion. This is not to disparage him, or the religion - of which I am also a member - but just to give perspective to my final words to him.) After I motioned him to roll down his window, I told him "Don't forget, 'let him who is without sin cast the first stone.' As soon as you're perfect, buddy, then you can talk."

I don't bring up the fact that I quoted John 8:7 to a motorist simply to say that I know scripture, but to point out that yes, we are not perfect. We run stop signs and do things that are against the law, but so do motorists. how often when we are behind the wheel do we exceed the speed limit? How often do we make that U-turn where we are are not supposed to? How often do we try to race the yellow light so we don't have to stop?

Yes, I don't stop at every stop sign when I'm on my bike, I also don't always obey the speed limit when I'm behind the wheel of my car (as the highway patrol in Orderville, UT are aware). My point is not to be so hasty to judge and point blame. None of us are perfect.
Posted by Bike Junkie at 10:36 AM

Email ThisBlogThis!Share to TwitterShare to FacebookShare to Pinterest
Labels: rant of the day, tales from the commute