Salt Lake City has recently made some fairly large advances in their cycling infrastructure. Most Recently, they added a Cycle Track on 300 E between 600 S and 800 S, with a buffered bike lane until 900 S.

My normal commute takes me in the opposite direction, but last week, I was riding down to Sandy, and had the chance to try out the new lanes. 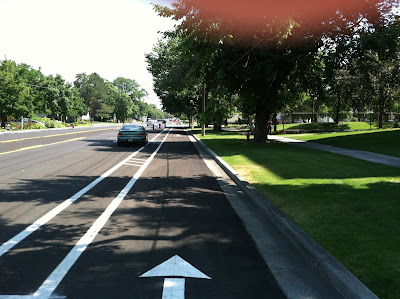 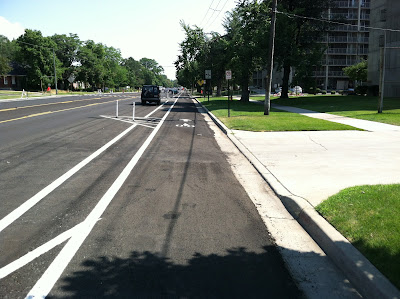 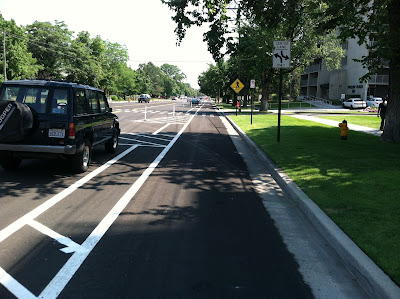 So, as you can see from the above pictures, a cycle track is essentially a protected bike lane. They moved the on-street parking away from the curb, and added a protected bike lane (a lane with a door zone) between the curb and the parking.  The 600 to 900 S block of 300 E was chosen for the pilot program because of it's relative proximity to downtown, popularity among cyclists, and light traffic (funny how those last two seem to frequently go together).  After getting input from residents, businesses, bicyclists, and the general public the cycle track may be extended, and implemented on additional streets.

The cycle track model has been implemented in other cities around the United States with favorable results.

Additional information about this, and other information regarding bicycling in Salt Lake City can be found at www.bikeslc.org.
Posted by Bike Junkie at 4:42 PM

Boise could use those

There used to be something like that on my route to work, but the last couple of days, I've noticed that construction crews ground off the paint from the roadway. I'm not too excited about that - the extra foot or two between me and the cars made the bike commute that much more enjoyable.