I just lost my wallet.

Seriously. I left my office and grabbed a city bike to ride up to the local 7-Eleven to top off my caffeine reserves when my wallet apparently fell out of my back pocket. I only found this out when I was unable to pay for my Big Gulp.

A ride back down to the docking station, and a walk back up and down the street turned up nothing. Giving up hope, I was just about to start canceling EVERYTHING, when I recieved a text. 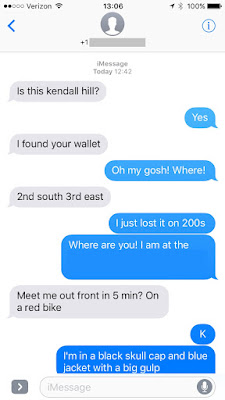 Thank you so very, very much to the guy on the red Bridgestone MB-1 for finding and returning my wallet. He said that he saw the wallet, googled my name, found my LinkedIN profile (which I haven't maintained for a few years now), saw that I worked with the Tour de Cure, called them, and they told him my cell phone # which they still had. He wouldn't even accept a reward for returning it.

People who ride bikes are awesome!

Update: He left a voicemail that I didn't notice before, so I can now thank him by name. Thank you, Mike!
Posted by Bike Junkie at 1:20 PM

Email ThisBlogThis!Share to TwitterShare to FacebookShare to Pinterest
Labels: cyclists are awesome