Perfect Example of What's Wrong with Cycling in America 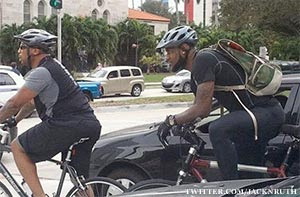 Stop the Presses (or whatever you would say in today's world of digital media)!!!
LeBron James rode his bike from his mansion to the arena on Sunday, then (shock!) rode back home after the game! A 40 minute trip each way!
The simple fact that this is considered news is stupid. He rode a bike. Big deal. People all over the world (most of them in Amsterdam) do this on a daily basis, and the world doesn't come to a screaching halt to report it.
One thing that I did notice about the article, is they made a point to mention that he was wearing a "giant helmet". This is America, after all, where any story about a cyclist has to include wether or not they were wearing a helmet - and if they weren't, and were struck by a car, it is automatically their fault.
Let's all give a well-meaning golf clap to LeBron, and get back to our lives. Don't get me wrong, I think it is great that he rides a bike, but I don't think it qualifies as news.
Posted by Bike Junkie at 3:20 PM